Although the book doesn’t alert readers to the fact, Vampire Loves is actually four graphic novels about the vampire Ferdinand. The graphic novels separately are referred to as the Grand Vampire:

The books have recurring characters, so you do need to read them in order.

Vampire Loves begins with Lani--part tree, part woman--showing up at Ferdinand’s castle and asking if he’ll take her back. The conversation quickly becomes aggressive, as Ferdinand points out that they would still be together if Lani hadn’t cheated on Ferdinand with his friend. In a twist of logic, Lani says it’s Ferdinand’s fault they broke up because he accidentally walked in on her and another man. Readers are instantly asked to dislike Lani, and she proves to be problems throughout the collection with her off-kilter philosophies. Ferdinand tries to forget Lani by staying in for the night. He talks to his cat: “We don’t give a darn, do we cat? We’re going to read a good book and stuff our face with cookies. Yeah, I know I’m pretty fed up with Proust too, but that’s all I’ve got. I lent out all my other books and never got them back.”

In an effort to find love, Ferdinand often goes around to bars and clubs, taking advice from werewolves and bartenders, but when he’s not paying attention, a woman enters his life. Meet Aspirine, who became a vampire at 17. Her human age shows (we don’t know how long she’s been a vampire) when she becomes jealous that Ferdinand and her sister, Ritaline, seem to have a lot in common, and Aspirine wants to be held, continuously asking Ferdinand if she can sleep with him to be in his arms, almost like a child. Though Ferdinand seeks love, he doesn’t love everyone he meets, and Aspirine strikes him as too needy for a vampire such as himself who just got out of a relationship. 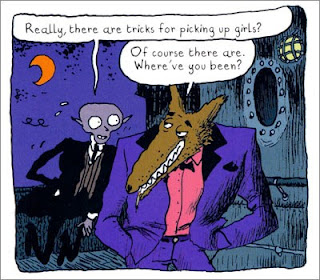 All of the characters Ferdinand meets in the hopes of finding love are memorable. There’s Sigh, who is basically a scarf for her owner, but claims to be a spirit who spreads sadness. There’s the Japanese woman who meets Ferdinand late at night in a museum and then can’t find him again (like a Craigslist missed connection). Another human woman seems to like Ferdinand but quickly shuts him down for petty reasons. It’s always a feat for an author to create so many memorable characters, especially if readers only meet that character briefly. 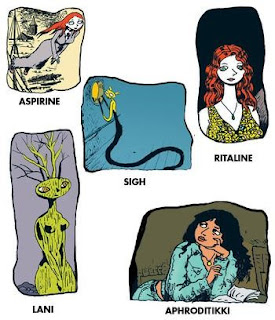 Vampire Loves also has a cute sort of humor about it, such as when Aspirine explains to Ferdinand how to play with his cat using his feet. Another instance, Ferdinand and Sigh sculpt creatures using Monster Putty, which causes the creations to come to life. Sigh gets upset that Ferdinand’s spider is picking on her bird--that is, until her bird eats the spider and becomes a hybrid monster.

Another lovely feature of Vampires Loves is its references to modern and older pop culture. Ferdinand listens to records by groups like Les Freres Jacques, a real musical quartet that started in 1946. Aspirine, however, likes Marilyn Manson. When the two enter a trendy club, readers catch patrons talking about cool new comic books, like Lenore: The Cute Little Dead Girl and Johnny, the Homicidal Maniac--which is also a sneaky way for Joann Sfar to praise his fellow graphic novelists.

Vampire Loves has a simple tone about it, unusual characters, and a quaintness that I’ve come to associate with European comics.