Poetry for the Masses - Our Celebration of National Poetry Month 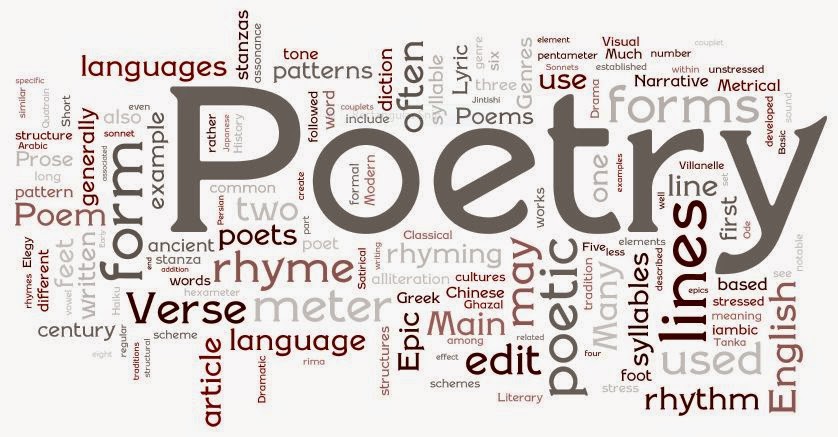 April is National Poetry Month and we here at TNBBC wanted to take a moment to add our praise and appreciation towards poets and poetry. Whether you are into the classics or prefer more modern and contemporary forms, you're bound to find a few new poets to fall in love with after checking out who we've been reading and admiring!

So I was never much of a poetry guy. Love me some Shakespeare, of course - but beyond that, it was pretty much Billy Collins and Seamus Heaney.  In fact, Heaney was my stated favorite poet until early this year when I read Saeed Jones' absolutely tremendous Prelude to Bruise. Not only is it the best collection I've ever read, it's the best thing I've read so far in 2015.

There's a physicality to the poetry and a confessional sense that transcends the words on the page. I felt changed after I read every single poem in the collection, somehow made new. Plus, I was lucky enough to see him read a few poems at an event and his gift with flow and rhythm and meter is even more apparent than it was on the page.

I've also been reading Amber Tamblyn's brand-new DarkSparkler, which is great so far. And although I'm honestly not sure if I like all of his work, Michael Robbin's poems are like the South Park of poetry. You shake your head at the silly dumbness and then stumble on brilliant social commentary. Still, he could be a bit less prolific and make that commentary hit harder.  But a line like "Is this Mick Jagger that I see before me? / Come, let me clutch thee" in his The Second Sex made me a fan for life.

Nick Demske's self-titled collection (Fence Books, 2010) was one of the first collections of poetry I remember reading and being excited by how the poet used the genre to play with language in a visual way. The line breaks often suggest the line ends with one word, only for the ending of the word to be on the next line. Demske's use of this strategy made each poem something I had to read and read again, filling me with surprise. I remember being intrigued and wanting to read different parts to someone nearby.

My favorite poet ever is Paul Laurence Dunbar (1872-1906). This was a man who captured the essence of the black experience in the U.S. The Complete Poems of Paul Laurence Dunbar is free to download, and it is in this collection that you can experience some of the best poems with the most soul around: "An Antebellum Sermon," "A Negro Love Song," "We Wear the Mask," and "The Colored Soldiers." The poems are written in dialect, so they take some getting used to, but you can listen to some performances of the poems by Herbert Woodward Martin.

Alphabet, by Inger Christensen (New Directions 2001) was translated by Susanna Nied and originally published in 1981. This collection is structured using a mathematical formula. For those who feel that poems can be challenging, understanding the formula helps you predict how the poem is shaped and why. I had a good time teaching this collection in a class and then having students use the math formula to create their own series of poems.

Sometimes it's hard to decide which collection I should recommend from Langston Hughes (1902-1967), so I'll just suggest The Collected Poems, a 736 page tome (Vintage Books 1994) that gets it all in there. Hughes writes some of the most important and beautiful works in American history. If you don't want to invest in a whole book, at least read these poems: "I, Too," "The Weary Blues," and "Dream Deferred" (The play A Raisin in the Sun got it's name from this poem).

Punk poet John Cooper Clarke is still writing and performing. In this reissued 1983 collection, you can sense the atmosphere of his gigs in the relentless rhythm, audacious rhyme and blunt language he uses to chronicle Eighties Britain. There is dark comedy, a strong sense of the ridiculous and moments of poignancy. And anger. Always anger.

This is a bilingual collection of poems by the Spanish poet and playwright who was killed in 1936 in Spain’s Civil War. I particularly like the spare, haunting imagery of the early poems. If, like me, you have some but not fluent Spanish, you can enjoy the rhythm and music of the originals then tease out the subtleties of mood and meaning in Williams’ translations, which are fine poems in their own right.

The poet and novelist probably best known for “Not Waving but Drowning”, Stevie Smith’s poems become odder the more you look at them. Apparently simple, even childish, with their engaging rhymes, they are full of melancholy, sly humour and something elusive. Which is just what you want from poetry.

It’s almost impossible to pick one favorite living poet. I love several different poets for extremely different reasons, but I think for this I’m going to pick Billy Collins. I could have said Barbara Ungar since I love her new book, or Jill Alexander Essbaum, or Jennifer L. Knox, or Matthew Zapruder or… the list goes on basically. But Billy Collins was the first poet where I thought “Hey, this poetry thing doesn’t have to be all serious and dark and overly deep.” Once I saw that, I would introduce Billy Collins to the high school students I used to teach, and I have the pleasure of watching a new love of poetry dawn on them the way it hit me. He may be a big mainstream poet now, but my experiences with him are very personal and very real.

Easy. Sylvia Plath. My love started out like a lot of female poets, with a sick fascination in her life and a passing interest in her poems. After three or four rereads though I fell in love with her careful words and her unique images. By grad school I fell deep into Plath’s world, reading her Unabridged Journals, her Letters, her fiction, even her children’s stories. My thesis argued that The Colossus is a technically stronger collection than Ariel. She’s more than the jilted woman writing emotional poems, she is an ingenious, determined and skilled artist.

I'm writing a post about my two all time favorite poets (Rod McKuen and Ryan W Bradley) for Alternating Current's blog The Spark, and rather than get redundant and talk about them here, too, I thought I'd share the quirkest, coolest collections I've read in the past few years instead:

Holy hell, this is some wild poetry. This is everything that poetry should be and never was until now. Honest and naked. Sensitive to the point of sappy but with a surprisingly hard core edge. Nate Slawson's words punch you in the gut with their beauty. They make you wish your boyfriend/husband/partner pined for you in such painfully raw and inspiring ways. This book touched me in places I shouldn't have enjoyed but did. I love it's naughty, raunchy little heart. If Panic Attack, USA were a person, I would kidnap it and hold it hostage in my closet and make it whisper its dirty little poems to me every night. It's slam. It's ragged. It's dirty and delicious.

But Our Princess is in Another Castle - BJ Best

Who doesn't love old school video games, right? If you're a GenXer like me, you can't pass up this collection of poetry inspired by the best of the retro-80's Atari and Nintendo games. Finding inspiration in the likes of Dig Dug,Pole Position, The Oregon Trail, and Space Invaders, BJ Best infuses his words with nostalgia and longing. Each poem recalls to us the wonder or aggravation of the game for which it was named, forcing us to recall those simpler times and sweeter victories. How very alike our feelings for these games mirror our interpretation of the world beyond the cartridge and console. Even the collection's title, cleverly stolen from the Super Mario Bros game in which each castle defeat left the gamer frustrated because the prize - the princess - was yet at ANOTHER castle... even the title causes that familiar ache of love, expectation, and disappointment to wash over us. Imagine what the words contained within will do.

Jessy Randall is a girl after my own heart. Her poetry is about robots, muppets, monsters, dreams, video games, and motherhood. It's perfection parading around as paranoia. It makes you giggle, snort, hiccup, and gasp. I stumbled across her collection just a few weeks ago while flipping through my twitter feed. Her Muppets Suite poem was linked through The Nervous Breakdown and I thought it was absolutely brilliant. The good news is... as awesome as this is.. there are poems within this collection that are even better. I know, how could that be possible, right? Her approach to poetry is so refreshing. I'm betting she'd be a cool chick to hang out with. Go on and get this one. You're going to find so much to love here.