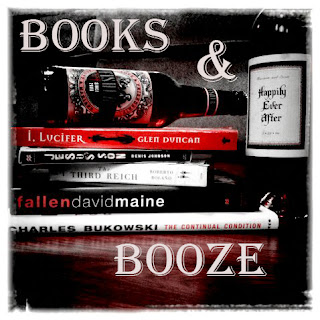 Today, MB Cashetta shares a deleted scene from her novel Miracle Girls, which released November 11th. Too funny that it's also the booziest scene!

An extra-dry gin martini on the rocks is the drink. Barely even a drop of Vermouth. This is what 10-year-old Cee-Cee Bianco‘s father drinks. It’s also, coincidentally, what my father drank. The other recurring beverage in Miracle Girls is Benadryl, which Cee-Cee’s family constantly feeds her to take the edge off her visions. In this way, father and daughter are equally stoned throughout the first third of the novel.

The Kirkus review of Miracle Girls points out the basic set up:

In upstate New York, young girls go missing, nuns are revolting, Nixon is resigning, and young Cee-Cee Bianco has visions of the Virgin Mary in this polished debut novel. Ten-year-old Cee-Cee has a broken family: Father Frank goes on drunken benders, mother Glory runs away for weeks at a time, middle brother Roadie is wracked with guilt over his burgeoning homosexuality, and eldest Anthony is a little off. Cee-Cee and Baby Pauly cling to each other, as close as twins.

The scene that got cut during the final edit, in which Frank is in a bar getting sloshed, and Cee-Cee is lying on a pool table drowsy with allergy medicine. Cee-Cee’s mother has taken off again, and Frank has paid the local cabbie to pick his daughter up at home (it is Christmas break) and drop her off at the Blanche’s Iron Door, the bar he frequents. She has a fever:

Frank has Cee-Cee lie down on an empty pool table, bunching up his coat for a pillow. She can see the shiny jukebox, squat and solid with its silver chrome and bright blue lights, behind the mismatched tables and chairs shoved onto the dirty square of plastic flooring. If her head didn’t hurt, she’d get up and use Blanche’s secret stash of quarters.
The bar is empty.  Under Cee-Cee’s limp body, the green felt is comforting.
Frank takes a barstool. “Gin with a splash, Blanche. Extra dry.”
“No kidding.” Blanche takes a wad of bubble gum from Cee-Cee’s mouth and feeds her two baby aspirin, covering her with a red-and-white checkered tablecloth, plastic on one side, fuzzy on the other.
“I feel hot,” Cee-Cee tells her.
“Well ‘course you do, baby,” Blanche says. “That’s why Old Blanche never prays.”
Over Blanche’s pink turtleneck, a red sweater is stretched tight. Near one shoulder, one reindeer says “Ho, Ho, Ho” in white stitching.
“Close your eyes now, bunny.” Blanche smooths her hair. “Don’t go worrying yourself about Jesus, Mary and Joseph. They can take care of themselves.”
Frank produces a bottle of the magic pink liquid and tosses it to Blanche. “Give her some Benadryl.”
“You can’t just go around drugging your kid,” Blanche says. “And then you wonder why she hallucinates angels and talks to God?”
“It calms her down.” Frank shrugs.
Blanche sighs, gives Cee-Cee a sip from the bottle.
Under the dark beams of the old bank ceiling, Cee-Cee is swimming in and out of a heavy sleep, catching snippets of the conversation.
“It’s this damn economy…And some new kind of bomb…”
“Hell of a thing…” Blanche snaps. “A bomb that can drop itself.”
Cee-Cee kicks off the tablecloth, uncomfortable.
“I grew up on that base,” Frank is saying.
“…fancy severance package can’t be all bad.” Blanche comes around from behind the bar and touches Cee-Cee’s forehead, checking the fever.
Cee-Cee tries to tell Blanche about the names Glory called Frank over Christmas dinner: Whiskey-dick, Asshole, Bum.
“What’s the matter? Can’t get comfy, kangaroo?” Blanche flicks on the TV. “Try the boob tube for awhile. That always puts old Blanche right to sleep.”
A trio of violins from a daytime soap opera fills the room. It’s not one Cee-Cee knows. A man with a beard tells a blond woman, “Love will kill you.”
Frank and Blanche stare at the TV as a newscaster comes on with a special report about the girl missing since Christmas Eve.
A photograph comes on screen: a girl with wavy red hair, freckles, a gap in her smile where Cee-Cee can see the faintest flash of tongue. The reporter describes the pink sweater the girl was wearing when she disappeared.
“Sure are a lot of sickos around here,” Frank says.
Kidnapped, says the newscaster somberly.
“Shame,” Blanche says. “More girls go missing right here in this part of New York State than anywhere else in the country. Heard it on the radio.”
“Yeah.” Frank says.
Next on the T.V., a bunch of Vietnam protesters with long hair shout at the camera. They hold up two-finger peace signs and shake them at the screen.
A reporter interviews a nun in full habit carrying a protest sign about the war.
“What’s this?” Frank says. “The Flying Nun? She looks like Sister Bertrille.”
“Those Sisters from Our Lady of Sorrows are always up to no good,” Blanche says. ““Chaining themselves to the gates of the military base when they’re supposed be teaching long division and catechism. Vietnam protesters. How is that God’s work?”
“Who do they think is protecting their sacred asses from communism?”
“Aren’t they friends with Marina? The Sisters of Something-or-Other.”
Frank can’t stand God or Nonnie. “Glory’s mother is a holy roller.”
At the commercial Blanche lowers the volume and smiles at Cee-Cee. “My Norbie sure is going to be glad to see you lying there like a princess when he gets home.”
The green fuzz beneath Cee-Cee’s body is soft. She falls into a dream about red-haired girls in pink sweaters.

In Blanche’s apartment, they turn on the lights, start a fire in the stove, and open several cans of soup. Blanche parks Cee-Cee on the sofa with an afghan and flips on the local news.
On a tiny black and white set that looks like it was made for a doll, the newscaster gives an update on the kidnapping. A piece of pink sweater was found on a chain link fence down by the railroad tracks.
The missing girl’s name is Eileena Brice Iaccamo.
Blanche clucks her tongue. “Don’t those Iaccamo kids go to Catholic school with you at Queen of Sorrows, Mary Margaret?”
“A bunch do,” Mary Margaret answers. “There’s about a million of them, all with Irish first and middle names. The older ones go to public school at Romeville Free.”
“Missing girl’s 14, the paper says. She must be up at the high school.”
Mary Margaret hovers close by, waiting for Cee-Cee to look up from the T.V. “Last year this girl in my neighborhood disappeared. In the spring, they found the snow piled up right over a set of fresh bones. Turned out to be a dead dog though. She was never heard from again.”
Cee-Cee chews a fresh piece of gum.
Mary Margaret watches for signs of weakness and comes up with a lie: “She was my best friend.”
Norbert chants in a loud voice: “They have to find this missing girl. They have to find her.”
Cee-Cee can see someone pulling a girl out of a ditch. “Jesus brought St. Martha’s brother back to life. Maybe you should pray for her.”
Mary Margaret bites her nails and frowns. “You don’t believe that crap.”
“Why not?” Cee-Cee says.
Mary Margaret thinks this over. “We could be best friends. You’d have to wear my neckerchief and call me on the phone.”
“How would I get your number?”
Mary Margaret pulls a pen out of her bag and writes her phone number on Cee-Cee’s hand.
The anchorman’s confident tone agitates Norbert. He crosses the room, thighs rubbing together in his gigantic green corduroy pants. He stands near the TV and shifts his weight from good leg to bad leg.
Blanche watches her son as she stirs the soup. He will be okay because he is giant and almost already a man. “Remember, girls, it’s just as unsafe in some houses as it is outside them.”
“Do you think they’ll ever find this kid, Missus?” Mary Margaret asks.
Though the pale sun is almost entirely burned out in the winter sky, Cee-Cee feels it blaze in her heart when Mary Margaret turns and smiles.
“Don’t worry, baby.” Blanch say. “They find everyone sooner or later.”

MB Caschetta is the recipient of a W.K. Rose Fellowship for Emerging Artists, a Sherwood Anderson Foundation Writing Award, and a Seattle Review Fiction Prize, among other honors. Her work has appeared in the Mississippi Review, Del Sol Review, 3:AM Magazine, New York Times, and Chronicle of Higher Education, among other literary journals and media outlets. These days you can occasionally find her drinking a gluten-free beer, waiting for the day when sorghum will taste as good as hops, but she doesn't hold out much hope. Mostly she drinks tea. Miracle Girls is her first novel.
Posted by TNBBC Super Mod at 5:00 AM