AudioReview of All Things Denis Johnson and Will Patton

Rather than review each of Denis Johnson's audiobooks separately, I thought I'd spare you the multiple obsessive-love-gushes and cram them all into one post. It'll be like ripping off a band-aid, I promise. You ready? Ok, here we go....

I have to start this whole thing off by telling you how absolutely perfect this pairing of author and narrator is. Now, I confess to never having read Denis Johnson in print and I've never really seen Will Patton act, but holy hell, this combination is fucking magical. So magical, in fact, that I want to run up and whore-kiss whoever made the decision to partner them up. Seriously. When I die, my only request is that Denis Johnson write my life story and Will Patton narrate it.

I really had no clue who Denis Johnson was or what sort of novels he wrote but I was jonsing for new audiobooks, and saw this lying in the audio bins for $5 at the new Wholesale Distributor that opened up. When I searched the book on Goodreads, I saw tons of positive reviews and thought, what the hell, I'll give it a spin.

When I initially went to review this, I lost my words. All I could think of was "wow". Will Patton's whispery, clench-teethed narration perfectly complimented the drug addled voice of the collection's protagonist and Denis Johnson's sparse and powerful writing. I was glued to my car's speakers to and from work. I felt the words of the interconnected stories pulsing through me.

(Have you seen the indie film? I watched it immediately upon finishing the audiobook [the joys of netflix, instantaneous streaming] and while it was well done, Billy Crudup just couldn't capture the character the way Patton did.)

The story was actually right up my alley. A flawed and fucked up young dude, popping every and any pill he can get his hands on, falling in love with the wrong girls, hanging out with the wrong crowds, running his ass into the ground and dancing around death's door a few too many times before dusting himself off and cleaning himself up, and walking away from it all towards something better.

My favorite scene: When FH and Georgie wake in the cab of the pickup the morning after rescuing the little baby bunnies, only to discover FH has smooshed them in his sleep - Georgie: "Does everything you touch turn to shit? Does this happen to you every time?" FH: [weeping] No wonder everybody calls me "Fuck-Head." Georgie: It's a name that's going to stick. FH: I realize that. Georgie: "Fuck-Head" is gonna ride you to your grave. FH: I already said so, I agreed with you in advance.

Needless to say, once the audiobook was over, I was jonsing twice as hard for another, and not just any audio would do. Oh no! It HAD to be Denis Johnson and Will Patton, and I was hoping to hell that the Wholesale Distributor had some in stock. 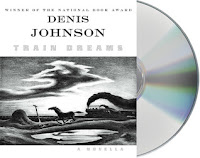 Back at the store, I found the Train Dreams audiobook, which won Denis Johnson The 2011 National Book Award. When it was initially announced, I had no interest in reading it at all. Turn of the century American West novels typically don't do a damn thing for me. But having experienced the magic of Denis Johnson's writing and Will Patton's narration, I wasted no time at all and plucked the little guy up and out of the audio bin, rushing to the counter so I could pay and pop it into the cd player of my car post-haste.

It's all railroad workers and fires that take out entire towns and making money any which way you can. Grainier, our main man, follows work where it takes him and suffers some of the most amazing and awful situations. It's an epic novella, in the sense that we follow Grainier through the many decades of his life, though it is one of the shortest audiobooks I have ever listened to. From the memories he's lost of his family growing up, to the curse laid upon him by the chinaman he tried to kill, and the deaths of his wife and baby girl, we watch Grainier fall apart and pull it back together in this incredible tale of identity and individual perseverance.

Will Patton nails it once again, with pitch perfect pacing, filling each sentence with raw and ragged emotion. Denis Johnson manages to say more with less and leaves you with a story that haunts you long after its over.

And back to the store I head again...

Nobody Move is another one of those tricky books. Had I not already fallen head over heels for Denis Johnson and Will Patton, I wouldn't have touched this book with a ten foot pole. Set again in the American West, Johnson goes crime novel on us and tosses us into the middle of a  $2.3 million dollar cat and mouse chase where everyone is fucking everyone else over and no one sees it coming until it's too god damned late.

BUT, I was already head over heels for this twosome so the plot meant nothing to me. I NEEDED to experience Johnson and Patton again and no one was going to get in between me and this audiobook. And it turned out to be quite the pants-pisser, actually. These two guys, being the perfect team that they are, could probably read the phone book and I'd be all into it...

So here we've got this pulpy thriller with a dumb-luck leading man who manages to scrape clean out of some of the most ridiculously dangerous set-ups: Jimmy Luntz has stupidity and the worst kind of luck on his side. That last minute I-think-my-luck's-just-run-out kinda luck. He gets in with the wrong crowd, ball-eating local mafia wanna-be types, and falls in love with the wrong sorta girl, so not only does he have to work hard at keeping HIS own tail clean, but now he's also kind of inherited his girlfriend's mess as well. With big money comes big stakes and Denis Johnson just keeps raising 'em till we're left wondering how much more our not-so-heroic hero can take.

There's still one more audiobook out there, Tree of Smoke, and I'll be popping in and out of that store till they get it in stock, stalking the store like a drug fiend, and scaring off all the little kiddies and old fogies....