Audioreview: You Are Jaguar 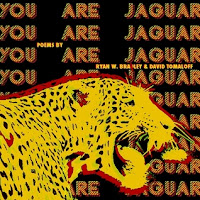 This is the way poetry should be.

Ryan Bradley and David Tomaloff have pulled out all the stops in this incredibly creative collection of poetry. Want to read it in print? Check! Want to listen to each poem as it's read to you? Check! Want to know what each poem would look or sound like if it were edited by two different poets? Check!

You Are Jaguar - a collaborative poetry project - is the multimedia melange debut of ADP's Twin Antler Imprint. And what a debut it is.

Here's how it all went down:

Ryan and David wrote the entire collection together. Then, separately, they edited each poem and gave it a name. When they came back together, what they brought to the table were two totally different, uniquely formatted collections. Released in a style equivalent to most translated poetry - because, as they mention in Jaguar's foreword, what is this process of individualized editing if not a form of translation? - the poems are laid out in print side by side.

What's interesting to me is the obvious differences between styles when the poems are laid out in this way.

Visually, Ryan prefers tightening the poems, condensing them, with a focus on word minimization, saying more with less. While David's poems are more spacial, sprawling, and wordy. Ryan uses the title to describe the poem. David's titles support the title of the collection, a liberal sprinkling of You Are's and We Are's.

The audiobook, which is how I initially digested Jaguar, was an auditory delight. The concept is for each poem to appear as an individual track, much like an music album. That means 73 audio strips that average less than a minute a piece. Which would have flowed like melted chocolate through my car speakers had I had an MP3 player that read them as such. Unfortunately, my Droid requires special attention and forced me to queue up each new track once the current one was finished. (I do not recommend doing this while you are driving during normal commuting hours!!)

Independent of that, the beauty of the readings did not escape me. David's recordings, throaty, breathy and gargled, sounded like a throwback to the days of vinyl. Ryan, on the other hand, is crisp and clear, as though sitting at the table across from you. The unique recordings help the listener to not only differentiate between reader but also influences the way you perceive the poem.

I would strongly advise you indulge in both - the visual and the auditory - to fully experience what Ryan and David have created. Go here to get them.
Posted by TNBBC Super Mod at 5:00 AM