Tell Me a Story : Thor Garcia 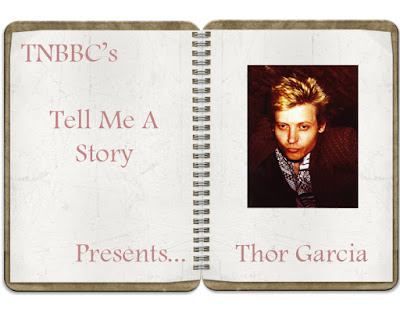 Tell Me a Story is a monthly series that features previously unpublished short stories from debut and Indie authors. The request was simple: Stories can be any format, any genre, and any length. And many amazing writers signed up for the challenge. This month's story comes from Thor Garcia, author of the upcoming novel The News Clown, which is being released this spring by Equus Press. Born in , , Thor has worked as a journalist in , , City and , where he continues to live. His story collection TUND was published in 2011 by Litteraria Pragensia. Garcia’s stories have been published online in Dogmatika and The Drill Press, and in VLAK and GRASP, among others.


The News Clown was a finalist in the 2009 Amazon.com Breakthrough Novel Award. Today, Thor shares an excerpt from it:

It was warm and sunny the day Joyce and Jerry showed up to move Jerry out. They drove up in a white rental van.

Joyce, according to Jerry, had a “degree in brain surgery” and was enrolled in a work-experience program at . What they did there, apparently, was experimental surgeries on rats. According to Jerry, Joyce’s job was to knock out the mouse, lock him into a contraption, then use a laser and scalpel to remove the top of his skull. Later, other experts would come in to work on the brain.

“Thanks for caring so much.”

“I am sincerely trying to help you.”

Joyce was a big girl, nearly six feet tall, four or five inches taller than Jerry. She wore a purple sweater, her bulky thighs covered with loose blue jeans. She was light-haired and full-faced, with a look to her eyes that seemed to combine wholesomeness and insanity.

After his first date with her, Jerry told me she had been a practicing lesbian for several years. But the lesbianism was several years in the past now.

After the second date, he told me that she believed I was a big part of his problems.

“You’re not the cause, but more of a symptom that reinforces all the reasons why I’m unhappy. . . .”
“You think so?”

“Think about that. . . . I murdered my baby, man. Or at least I let Candace murder it. It’s nearly the same thing, bro. It’s something I’ll always have to live with. I can be forgiven, but I don’t know if I’ll ever be able to forgive myself. . . . You know what I mean? There’s no excuse for people who kill babies as a birth-control method for their personal convenience. There was a baby moving around in there, man! My baby. And she sucked its brain out and they threw it in the trash.”

“Yeah, it feels all right, Jerry.”

Jerry had cut his hair short and grown out his goatee. He had kept the earrings, but got rid of the contact lenses. He wore glasses everywhere now.

The latest thing was Joyce had converted him to Christianity. They went several times per week to a church where the priests and other high honchos were nearly all homosexuals and lesbians. They held barbecues and ping-pong nights. Church of the New Christ Savior Risen, it was called.

“You did what?” I remember saying.

“See, that’s part of the problem,” said Jerry. “No one ever listens to what Jesus really says. Jesus offers the way out, bro. . . . He says we don’t need all this craziness, this garbage. We don’t need to destroy ourselves. He says ‘Let it be, because I am the truth and the light.’ He doesn’t lay all these trips on you – that’s not Jesus. That’s other churches and people that abuse him. Jesus just shows . . . how easy it is to be a good person, to cast your troubles away and try to help others, to forgive and go on. . . . That’s why, like – I forgive you, Thor. . . . I apologize to you, and I forgive you.”
“Well, shit. . . . I forgive you, too, pal.”

“You don’t really mean it. You’re just saying it. Or do you?”

He came forward and we had a hug.

“This world’s coming to an end,” said Jerry. “I want you to be ready, bro. Nobody knows how or when, but we know it’s coming. This whole place is gonna go up in flames, man. It’ll be a question of who’s ready and who’s not. I hope you’ll be ready.”

“I’m ready, Jerry. I’m waiting for it like everybody else. Don’t worry about me. I’ll be just fine.”

It took about 45 minutes for the three of us to load Jerry’s things into the van. Joyce seemed very bothered by the worms in the apartment, she recommended that I move out and that the city health authorities be called in. She offered to call them herself. She claimed to be worried about my health.

When we were done, I offered to take them out for a drink and a hot dog. They agreed, but added they only had “about an hour.”

I climbed into a crawl space in the back of the van, and Joyce drove us the mile or so to The Hacienda. I ordered a pitcher of beer and three shots of tequila, despite their protestations. They insisted that they would not and could not drink, under any circumstances – and they did not. Joyce had a green tea. Jerry had an O’Doul’s non-alcoholic, then settled for a tea himself.

I drank their shots and the beer pitcher. I went out for a smoke, came back and ordered another pitcher and two more tequila shots.

Jerry went off to the toilet and Joyce asked, “So what are you going to do, Thor?”

“Not much.” I took a slurp, raised my glass. “You’re looking at it. Continue until victory.”

I slugged a tequila, gulped beer.

She looked at me, shook her head. She sipped tea, smiled sadly.

“Living healthily is the only victory,” she said.

“Joyce,” I said, “do you know what they used to call syphilis?”

Joyce stood up. She had started crying.

I licked the bottom of the tequila glass. I sat there and downed the last of the beer from the pitcher.

I want to thank Thor for participating in TNBBC's Tell Me a Story. If you like what you've read, please support Thor by checking out his book.  Help spread the word by sharing this post through your blog, tumblr page, twitter and facebook accounts. Every link counts! And be sure to check back with us next month for the next installment....