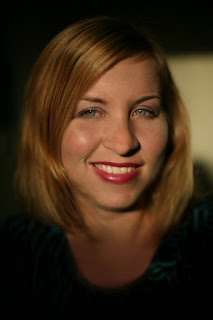 TNBBCer's, meet Malena Watrous. Malena, meet the TNBBCer's.
Harper Perennial sent me a copy of "If You Follow Me", a book about a young english teacher who moved to Japan with her girlfriend to escape the death of her father.
I was quite taken by Malena's story, and was thrilled when Harper's told me she would be interested in doing an interview.
I want to thank her taking the time to answer the following questions, as I know she was quite busy this weekend!


Who was your role model growing up, and why?
As an only child, both of my parents were important role models for me. They were very different, and I admired and emulated different things in each of them. My mother is earnest and sincere, loving and moral--almost to a paralyzing extent. On the one hand, I saw from her example that having a strong moral code was important. I always admired her, and felt very secure in her love. On the other hand, she wouldn't even tell a white lie, and that drove me nuts when, for instance, I just wanted her to tell someone who'd called on the phone that I wasn't home. My father was much more of a moral relativist. He had a dark and irreverent sense of humor that I seem to have caught from him. (Is a sense of humor catching?) He never sheltered me from anything (taking me on surgical rounds when I was really young) and was more of a risk taker. Both of my parents instilled a love of stories in me. As a family, we'd go on camping trips where we'd rip a novel into pieces so that we could all be reading the same book at the same time.

Aside from them, I feel like I made role models out of characters in the books I pored over and loved, in particular the tragic but plucky orphan girls (ironic since I had two loving parents) like Anne of Green Gables and Jane Eyre.


Who are you most influenced by today?
Lately I have been influenced by a few of my favorite writers and writing teachers, Marilynne Robinson and Tobias Wolff, who have both stayed vital in their writing and in their teaching after decades of service to both crafts. I hope to follow their example, remaining energized and producing stronger work with the passing years. I am also inspired by people like Dave Eggers and Vendela Vida who give back to the community, especially in the work that they do with kids, in addition to writing. Our school system is so broken, that projects like their tutoring space really matter. For the past few years I've been juggling writing and teaching and raising a small child, but now that he's getting a bit older, I hope to broaden the range of what I'm doing.

What was the writing and publishing process like for you?

The first part--getting a good agent; selling the book--was challenging and stressful. I had a lot of advantages going into it. I'd gone to a good MFA program, placed short pieces fairly well, won a Stegner Fellowship and a Michener Prize for the manuscript. But it was still hard to find the right agent for the book, and then it was scary after she sent the book out, waiting to hear back and knowing that if no one wanted it, then this thing I'd worked on for almost a decade might never see the light of day. (I'd seen that happen to a friend with a novel that I loved, so I understood the real risk). However, once the book finally sold to my editor at Harper Perennial, I really enjoyed the rest of the process. Together we spent a year working on the novel, seeing it through three revisions, but I always felt like my editor and I shared a vision for what the book should look like in the end. While the changes weren't easy to make, I felt confident that they would result in a better book. Once it was revised, the next steps--from agreeing upon a cover to figuring out how to get the word out--were a lot of fun.


In what ways would you say that Marina, the main character in your novel “If You Follow Me”, is like you? In what ways does she differ?
We definitely share a contrarian nature, that is at odds with a competing desire to be liked. We both like (and are) odd balls. We both bristle against the pressure to conform, and sometimes against rules period, in a way that can be slightly childish. But I made her a bit more naive (especially about Japan) than I am or was. When I moved to Japan, I had a lot more knowledge of the country (and a better ability to speak at least some Japanese) than she did, but I wanted her to be in a heightened state of shock, more unprepared for what faced her there. She's also a quicker study. She is healing from her father's death in the book, and comes further in a year than I did.

How did you come up the title for the novel?
Ah, the title. I wanted the book to be called GOMI, or Garbage, but the powers that be had problems with that title because it is a foreign word that would mean little to most readers and because it means "Trash." For a while it was called Repeat After Me. Then, about nine months before the novel came out, another book by that title came out. So we went back to the drawing board. "Temporary People" was a consideration for a while. A friend of mine actually suggested "If You Follow Me," which had been the title of a short story that he wrote. It was incredibly generous of him to offer to let me use it, but because I hadn't thought of it myself, at first I was hesitant. But the more I thought about it, the more I liked its metaphorical connotations. I like titles that mean a lot of different things.

What book(s) are you reading now?
I just finished the new Jennifer Egan, for review. It's called A Visit From The Good Squad, and I loved it but can't say more until I write my review. I also just read and loved Victoria Patterson's linked collection, Drift. A friend of mine, Eric Puchner, wrote a wonderful novel called Model Home.


Which 5 books would you save if your house to were to catch fire, and why?
Are we talking five books that are all I'd have left to read for the rest of my life on a desert island? Because I don't have any special editions I'd want to save--I'm not that sentimental about the actual artifacts--except maybe the copy of my novel that I've used at every reading, which I'm superstitiously attached to. But if I could only have five books for the rest of my life, I'd bring the Riverside Shakespeare, because it's full of different plays and would never grow old. Proust, because I love the language but never have time to finish it. Chaucer's Canterbury Tales--I was a medieval lit major, and I still love those stories. I think I'd also bring the fairy tales of the Grimm's Brothers, to share with my son. And Jane Eyre. I can't help it. I never grow tired of that novel, and get something new from it every time I reread it.


What is your take on eBooks and eReaders, both as an author and a reader?
After hearing from many people who swear by their Kindles, I got one for my husband for Christmas, and after buying about three or four books and reading those, neither of us ever uses it. I find the reading experience flat, much less engrossing than I do reading a book on paper. I know that technically you "own" the book in a digital library of some kind, but it doesn't feel like it. That said, I can see how they make a lot of sense for people who travel a lot, or people (like my grandmother) who appreciate the ability to enlarge print size. As an author, I'm just happy to have people read my books, no matter if it's on paper or on a screen. There's so much talk about the death of the novel. If new technology helps keep it alive, I'm all for it. But I'll keep buying real books as long as I can.

If you could sit and chat with any author, dead or alive, who would you choose to talk to, and what would you say?
To be honest, I don't feel a great desire to talk to authors. If I love someone's book, then I often feel the illusion of knowing them--an illusion that actually meeting them shatters. I do like reading interviews with or essays by authors, but when I meet them face to face, I get tongue-tied.
Please be sure to check out Malena's website, and grab a copy of her book while you're at it!
Posted by TNBBC Super Mod at 10:54 PM