A denizen of Brooklyn by way of Oakland, D. Foy has had work published in Bomb, Frequencies, Post Road, The Literary Review, and The Georgia Review, among others, and included in the books Laundromat and Forty Stories: New Writing from Harper Perennial. His novel, Made to Break, is forthcoming March 2014 from Two Dollar Radio. 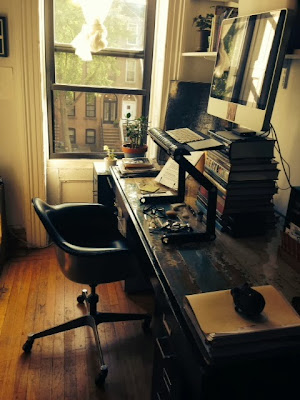 For a writer living in Brooklyn, or anywhere in NYC, for that matter, I feel pretty darned lucky to have my little study, what some friends who’ve seen it call my “man cave” (though I have to say I don’t care much for that expression). Spaces like this for schlubs like me aren’t typically available, and when they are, here anyway, the premium runs absurdly high. When I moved into this apartment with Jeanine about six years back, she’d already lived here for eight or so years and was using the walk-in closet off the bedroom not so much as an office as a sort of catch-all for stuff that didn’t belong elsewhere. I can write wherever I need to write, as long as the work’s on the small side. But to get into a big project, I really do need a space that’s both stable and my own, with a desk and good light and a place for the many books and notes and other reference materials I invariably gather about me. This is as ritualistic as I get, I think. I’ve done serious work away from my pad, on residencies and abroad, for instance, but wherever I am, I won’t attempt the nitty-gritty until I’ve first arranged the room I work in to suit me, even if that requires a militant, wholesale shuffling of everything in it. The space, too, has got to have a window. Without one, it’s for all intents and purposes useless. If there’s a couch or side table or wardrobe or what-have-you blocking the window, that is, I’ll do whatever it takes to open space for my desk. All of this is a long way of saying I’d soon appropriated Jeanine’s office (she’s a choreographer who, unlike her OCD hubby, can work on her computer most anywhere) with only a tease of resistance from her and in short order set it up to please me. 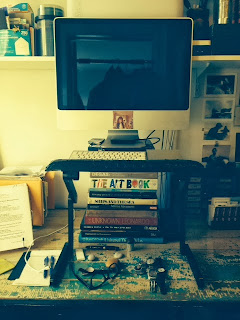 And I have to say I’m pleased. My desk is the centerpiece and focal point of the space, of course. Not too long after I’d moved to NYC, in 2004, I found an old door on a farm upstate and brought it home knowing I wanted to build a desk around it. Fortunately, my friend, the painter James T. Greco (whose work is in my opinion off the freaking chart), is also a wizard with all things material. I gave him the door and a few days later entered his studio to this gorgeous piece of furniture, at once immovable as a mountain and, with a ratchet and socket, collapsible as any piece of junk from Ikea. That’s the genius of the thing. James had taken the legs from an antique he’d found on the street and implanted a monster bolt into the top of each. Then he built a frame into which I could connect the legs from the bottom and drop the door from the top, hiding the mechanics beneath it. All told, the piece comprises six parts I can take anywhere I like. The door, by the way, James covered with layers of clear resin, which has assumed a patina I think awful spanky and which, as if it needed improvement, enhances the old-timey quality of the door as I found it, painted with at least three different colors across the years, all of them now in various stages of corrosion. 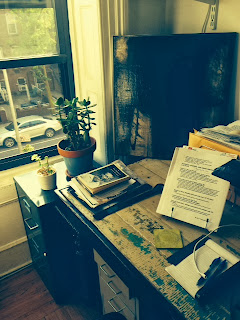 To the left of my machine I’ve got a small painting, also by James (it’s called “Yamamoto,” after the great Yamamoto Tsunetomo, the seventeenth-and-eighteenth century samurai-turned-monk who wrote Hagakure: The Book of the Samurai). 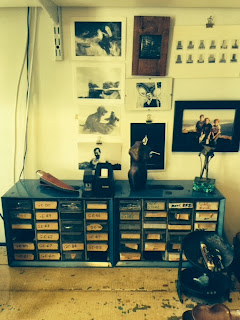 To the right, I’ve got a couple mini cabinets, metal and plastic from the late ’50s, tossed to the street from some old guy’s shop here in my hood of Carroll Gardens and which I use for keys and locks and rubber bands and paper clips and other bureaucratic miscellany. On them is a hunting knife, handmade for my father-in-law who passed away last year (his name’s etched on the blade with acid), a wax figurine from the ’70s by an obscure artist named Edward Y. W. Li, and, from my brother, a very strange bronze statuette, circa 1930, that’s fascinated me all these years for reasons I’ve never tried to say, of a decrepit or deformed minotaur clutching a pair of walking sticks. Between the statuette and figurine, there’s an Indian-head penny from 1906.

Above this stuff Jeanine and I hung some family photos (this is the only place in the apartment family pix see light), along with some cards she’s given me, each of them featuring a pair of different dogs having the kind of fun only dogs seem able to have. 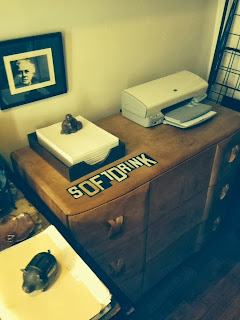 To the right is a bureau, also off the street (a requirement for the home of any New Yorker, I’ve been told), held down with my printer and paper and adorned with Jeanine’s nickname in old tin signage letters I copped from an ephemera boutique in Andes, up in the Catskills. The paperweight is a Buddha statuette, also from my brother, of amber jade. 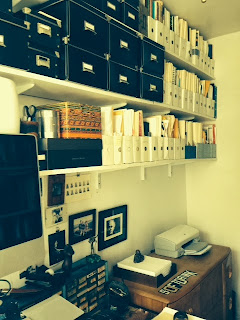 Above it all are three shelves running the length of the room and loaded down with my collection of keepsakes, notes, pictures, letters, and cards from the significant people and events in my life, which, like a lot of writers, I rely on in a big way when it’s time to conjure up moments long-gone. This stuff has been especially useful for the extended memoir project that’s engaged me for the last few years. 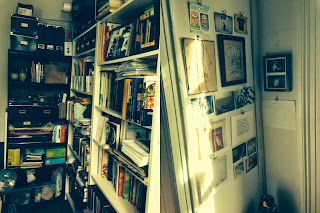 Behind me, on one side, I’ve got bookshelves with more of the same, plus my many dictionaries and reference books, and, on the other side, a wall of postcards and art that speak to me. The “White Owl” piece is from the top of the box of cigars my old man passed around when I was born.

The biggest and most recent change in my routine has been ergonomic. What with my personal projects and freelance work, I’ve spent so much time in this little room, sometimes fourteen and sixteen hours a day in my chair for weeks on end, that my back can no longer handle the load. The solution, so far at least, has been simply to stand before my work rather than sit. After a considerable search across the internets, I discovered a collapsible platform for my key- and track pads, then fashioned a hoodoo of encyclopedias and art books to raise my monitor. 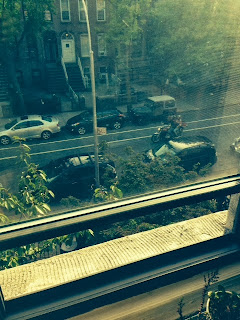 It’s taken some getting used-to, this standing, but now I have the advantage of seeing everything through my window, including the many traffic jams on the busy but narrow street below, made when some knucklehead double parks and blocks the way for busses and trucks. A time or two out of the many that drivers have forgotten the brownstones to either side are loaded with actual people, I’ve gone fairly native, Jackie Gleason style, and yelled out the window for them shut it already. If you haven’t ever done this, I recommend it, for both the catharsis and the experience itself. It’s the next best thing to shouting at a player in the ballpark that he’s a no good bum.