Indie Spotlight: C.G. Bauer's SCARS ON THE FACE OF GOD 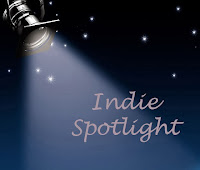 Back in 2010, I reviewed C.G. Bauer's Scars on the Face of God, a book I had longed to read and, when I finally got my hands on it, really enjoyed. It's this slow, chilling southern-gothic tale of a town with some nasty secrets to hide and it really blew me away.

This morning's spotlight features an excerpt from the book, provided by C.G. as a promotional peek, because starting today through Halloween night, Scars is free to download on amazon.  Take it from me, if you haven't read it yet, now is the perfect opportunity to score a copy for your kindle!

Excerpt from SCARS ON THE FACE OF GOD: THE DEVIL’S BIBLE. The novel is set mostly in 1964. The protagonist storyteller is Wump Hozer, a 65-year-old church custodian. An orphan, he never made it out of the sixth grade. “Wump” of course is a nickname. It comes from the sound a crowbar makes when it hits a man’s head. Here is Wump giving us some backstory. --- Chris Bauer 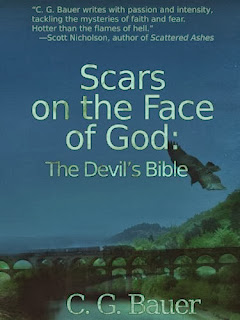 A grudge in the hands of the rich and powerful is a terrible thing. Grudges in the hands of their hired help are no less terrible, but with fewer ways to satisfy them they for sure have a longer life.
The year was 1935, and a skin rash that started on my right wrist and moved north onto my arm and chest was what finally made me leave the tannery. This and Viola’s second miscarriage, plus one confrontation I’d had with Mister-Fucking-Laughing-Pile-of-Shit-College-Boy Hughie Volkheimer soon afterwards, him a freshly minted graduate who his old man had made into a tannery supervisor, and me ten years older, just trying to make a living. Leaving the tannery was the best thing I could have done for myself. Best thing for Hughie, too, otherwise I might have killed him.
“You there,” he’d called to me on that last day, his finger tapping the air like a hen pecking a barnyard, “Hozer. Hop on down next to that bin, grab a shovel and start loading up that truck’s payload. We’re short back here today.”
Me and him were the only two people on the tannery loading dock. I was dumping parts of a cow carcass into an open metal box, which was riling up the flies inside the box pretty good. It was then I seen that more than a day’s worth of waste was sitting under them buzzing flies, all mixed in with leaking cans of bleach-based cleaning solvent plus other used leather tanning chemicals. I wanted no part of what he was asking.
“I’m a tanner, not a cleanup guy,” I said, shaking my tilted wheelbarrow. A pesky piece of unidentifiable cow scrap refused to budge; I pushed it off with my hand. More buzzing flies. “Get Otto to do it,” I told him. Except I already knew what an extra day of cow parts sitting in the box meant: Today there weren’t no Otto.
Out back of the tannery had been, and I expect still is, a half-buried lagoon of arsenic-based insecticides and tanning chemicals, plus hundreds of barrels of crud-eating machinery detergents and other tannery process by-products, including lead and chromium. The industrial revolution by way of the Three Bridges local tannery industry was doing its damnedest to revolutionize the few small foothills and one green valley on this back section of the Volkheimer property, a couple of hundred acres or so that weren’t more than a football field away from a creek feeding the Wissaquessing River. The creek bank had turned into dead space, starting from the pits where animal hides and hair and other slaughterhouse wastes lay rotting, then fanning out across acres of what had once been scrub pine akin to them barrens in New Jersey. It wasn’t like the Jersey Pine Barrens scenery ever actually looked good even though the earth was alive, but it for sure looked a whole lot better than the singed armpit of a spread hidden in the back of the tannery’s property.
“Otto’s under the weather today,” Hughie said, “so I want you to do it.”
Under the weather the prick called it. Christ, Otto had been wheezing for months, which weren’t no surprise considering the chemicals he inhaled. Weren’t but a few years earlier another kraut fella who handled the tannery’s waste, the one before Otto, showed up dead in the north woods, found first by the local wildlife then afterwards, what was left of him at least, by hunters. Cause of death, a Mauser shot to the temple, self-inflicted according to his note. The real cause of death, or what made him pull the trigger, was tumors all over his lungs. The man was all of thirty-eight years old.
“Like I said, Hughie, it’s not my job.”
“You’ll address me as Mr. Volkheimer, and your job is what I tell you it is, Hozer.” Hughie unfolded his arms and gave a gentleman’s tug to the bottom of his vest with both hands, liberating his chunky neck from a starched shirt collar. “Start loading that waste and those solvent cans in your wheelbarrow and get moving. You know where it goes.”
The owner’s son was all Hughie amounted to, but this meant that compared to the rest of us, he shit lavender and roses. Still, I weren’t never one for ponying up to authority that hadn’t really earned it. “Sorry, Mister Volkheimer, but I won’t be doing that. I’m heading inside now to get back to work.”
I turned my back on him and started off, expecting maybe I’d get a biting comment or two, but what came out of his mouth stopped me cold.
“Do what I say now, Hozer, or I’ll have you sacked. Then you’ll wish for your wife to miscarry every time, since you won’t be able to support a family.”


Hughie didn’t stay upright much long after that, and he was lucky to have come away with only a few fractured ribs and a sore jaw, and the gooey yellow contents of one of them open solvent cans stuffed down the pants of his vested management suit. It took three men to pull me off him that day, with the same three men escorting me out of that fucking tannery, me vowing never to return. I kept the vow for six years, right up to the day Otto’s wife asked me to collect her deceased husband’s work belongings. Cause of his death: tumors on his lungs.

Scars on the Face of God: The Devil's Bible can be purchased on Amazon: amzn.to/tV3K0g. C.G. Bauer can be found on facebook.