Where Writers Write: B J Hollars 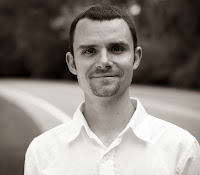 This is B J Hollars.

He is the author of Thirteen Loops: Race, Violence and the Last Lynching in America—the winner of the 2012 Society of Midland Authors Award—and Opening the Doors: The Desegregation of the University of Alabama and the Fight for Civil Rights in Tuscaloosa, as well as collection of stories, Sightings.  He teaches at the University of Wisconsin-Eau Claire.

Where B J Hollars Writes 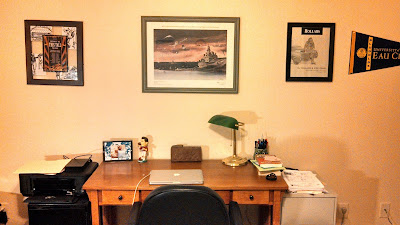 This is where I used to write, back before I took Truman Capote’s lead and took to the bed, instead.  I imagine Capote being a lot better at it—rarely spilling coffee on his crotch or getting his legs tangled up in the sheets.  Me, I’m not so good at it, at least not yet.

But after my son was born, writing in bed became a necessity.  It was a means of survival, mainly because it was the quietest place in the house.  For the first year of my son’s life, I used headband style earmuffs to block out the noise, which meant that while the rest of the world bobbed heads with Dr. Dre’s Beats pressed to their ears, I always looked like I was on my way to the firing range.  In truth, I might’ve had better luck writing there.  Still, the earmuffs worked for a while, at least until my son’s high-pitched wails hit the frequency that allowed him to penetrate the technology that kept deer hunters from going deaf.  Rest assured, while wearing those earmuffs, you can fire off a 12-gauge shotgun a foot from your head and be fine; just don’t stand too close to a four-month old. 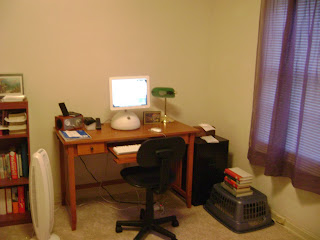 And this is where I really used to write, back when I was in grad school.  Note the same desk, the same lamp, even the same brick.  The computer has changed, of course, as have the knickknacks.  While the old writing space was littered with a radio, a notebook, an index cardholder, and a framed postcard, all of those things are gone now.  They’ve been replaced with what you see in the first photo: a mug full of pens, a couple of books, and a Joe Namath bobble head.  But just to the left of Namath you’ll see a new knickknack: a framed photograph of my son and me lying on the living room floor.  The photo (complete with finger-painted border) was a gift I’d received for my first Father’s Day in 2012.  It reveals a young boy who used to be me with an arm around an even younger boy that used to be him.  But we are not those people now.  Back then, he was just some four-month old with a banshee scream who could pop the earmuffs from your head.  And I was just some punk dumb enough to think there was actually a need for those earmuffs.

We’re both a year older now, and I, a little wiser.  Or at least wise enough to know that the earmuffs were a mistake.  I should’ve known better than to try to write through his first months, back when those banshee screams were still music to my ears.  I wish someone would’ve told me that the work would wait, but the diaper wouldn’t, that words wouldn’t abandon me just because I pushed a swing.

I admit that for a while there I feared fatherhood would be the end of everything.  That it would consume me, kill the writing, reduce life to toy trains and talcum powder.  But that’s not how it turned out.  Fatherhood’s had the opposite effect on my writing, mainly by giving me someone to write for.

A year from now, this desk will still be here, and so will that picture of us on the living room floor.  Probably, Joe Namath will still be there, too, bobbing his head like he’s blaring music from Dr. Dre’s Beats.  My loyal crew of lamp and brick will remain as well, though the knickknacks won’t save this desk from its fate.  Within a few months time, this desk is destined to become a finger painting station. And that’ll be fine, too.

I’ll just take once more to the bed, curl up with my coffee, and then, abruptly spill it all over my crotch.
Posted by TNBBC Super Mod at 5:00 AM