This week, Matt Salesses shares how he eats abroad:

1. I spent an entire year in Prague basically eating pasta, soup with pasta, fish sticks, bread and cheese, and peanut butter and jelly. When I wrote a novel set in Prague for my MFA thesis, I put the contents of my fridge into the book, and my adviser said at one point that it was one of the only times she remembered how young the protagonist was supposed to be.

2. I spent my first two weeks in Korea living in a love motel and eating frosted flakes from the box and washing them down with milk from the bottle. I'd been scared by a lonely planet guidebook that mentioned something, euphemistically, about diarrhea. I lost 20 pounds. I was rescued from myself by my future wife. 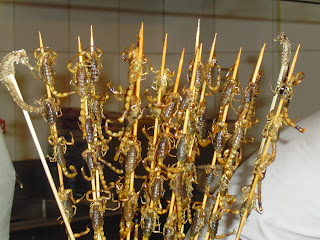