Jessica Goodfellow Recommends The Book of a Hundred Hands


Jessica Goodfellow Recommends The Book of a Hundred Hands

I recommend reading the work of Cole Swensen, a poet who enters each of her subjects so deeply as to inhabit it, but who then leaves it to the reader as an abandoned and haunted house. Each of Swensen’s books has its singular ephemeral obsession: for example, Gravesend (University of California Press, 2012) is possessed by ghosts, The Glass Age (Alice James Books, 2007) revolves around (what else?) glass and windows, and National Book Award finalist Goest (Alice James Books, 2004) tries to capture light in its hands. 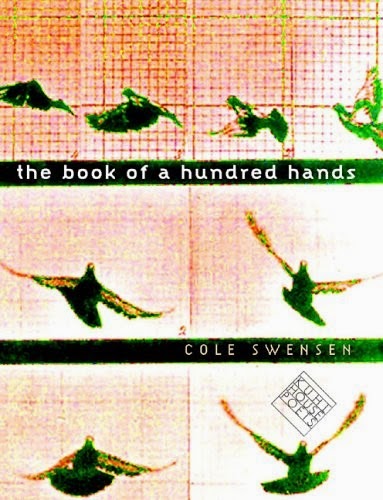 Speaking of hands, perhaps the most accessible of Swensen’s books is The Book of a Hundred Hands (University of Iowa Press, 2005), perhaps because its subject matter, hands, is one of the least ephemeral among her topics. These one hundred poems include ruminations on history, anatomy, basic functions such as gripping and grasping, hand gestures, handwriting, shadow puppets, art-making, and sign language. One of the sign language poems, “Thinking and Feeling,” begins “For instance, happy. That’s far away. So we gesture a little to the right of the head / in the sensation of / I couldn’t say. / A chime in a cell.”  Swensen uses jagged and staggered spacing along with wildly varying line lengths to mimic the movement of hands sweeping here, then pausing over there to form intricate finger movements. The poem ends with “We place / an inch and a half behind your left shoulder / a bird the size of a thumbtack. / You have to keep it happy forever.”

Swensen’s subjects are clearly researched with rigor, and yet her fragmented lines and loosely tethered imagery reveal only the essence of hands, ghosts, glass—whatever the graspless subject is. There’s a certain egolessness to having done all that work, but then winnowing one’s labors to an evocative nucleus. As a result, the reader gets the benefit of Swensen’s fixations with none of the accompanying mania. Well, maybe a bit of the mania. Enjoy!

Poems available online from The Book of a Hundred Hands include:
“The Hand’s Testament” (http://www.cstone.net/~poems/handsswe.htm)
“The Hand Photographed” and “The Hand Etched in Glass” (http://thepoetryexperiment.blogspot.jp/2005/08/cole-swensen-two-poems.html)
“The Hand Painted In” and “The Hands Testify” http://jacketmagazine.com/19/swe1.html
“The Hand Defined: I” http://www.conjunctions.com/archives/c35-cs.htm

Jessica Goodfellow’s books are Mendeleev’s Mandala (Mayapple Press, 2015), The Insomniac’s Weather Report (Three Candles Press First Book Prize winner, reissued by Isobar Press, 2014), and the chapbook A Pilgrim’s Guide to Chaos in the Heartland (Concrete Wolf, 2006).  Her work has been featured in Best New Poets, Verse Daily, The Writer’s Almanac, and forthcoming in Motionpoems Season 6. She has received the Chad Walsh Poetry Prize from the Beloit Poetry Journal. A graduate of Caltech, she lives in Japan.
Posted by TNBBC Super Mod at 5:00 AM