It's a great time to be a reader if you're into post-pandemic dystopian literature, isn't it? Lately, it seems as though every author out there's devising new ways to bring about the end of the world. And what I find most interesting about this sub-genre -the post-pandy genre- is the fact that these stories aren't actually concerned with the trigger, the thing that brought about the near-end of humanity. Because the trigger is simply a catalyst. The meat of these stories is in the aftermath.

Take Emily St. John Mandel's Station Eleven. She brought about the near-end of the world with a nasty, aggressive Super-Flu. Sure, she has to lay down some groundwork for it, but the bulk of her book focuses on what, and who, remains foremost in the survivors' minds. What are the survivors latching onto? What is keeping them human? What connects them to others? In her case, it's art and theater and culture.

Or we can look at Carola Dibbell's The Only Ones.  In a near future, a series of back-to-back viruses and infections plague the country and wipe most humans out. People are still getting sick and dying and this novel's concerned with just one thing... keeping our species from going extinct. So Carola's focus turns towards genetics and cloning and playing god by manufacturing hope for humanity in a petri dish.

True to the post-pandy formula, Sandra Newman infects her world with a strange virus that initially rocked the United States ages ago and which now lingers dormant inside every child, killing them slowly and painfully before they reach the age of twenty. Hers is a world containing only children. Hers is the country of Ice Cream Star and let me tell you.. what a country it is!

The novel is told from the point of view of Ice Cream Star, our fifteen year old protagonist, and is written entirely in a made-up dialect, with no glossary of terms in sight (more on that later). She and her brother Driver are part of the upper echelon of a small nomadic tribe of children who make their home in the woods of Massa(chusetts). Ice Cream's group refer to themselves as "tarry night sorts" (dark skinned) and operate under a hierarchy that is greatly influenced by the disease they call posies.

It is through Ice Cream's narration that we discover the "Nighted" States was once, way before her time, evacuated under the threat of this disease. If her bunch be "tarry night sorts", then where did all of the white people go? She ponders on Europe - a name that appears in the evac notices that still linger here and there in the abandoned homes they raid - as a place more likened to hell and myth than an actual, honest-to-god country people fled to, because of the occasional sleepers they come into contact with - the dead, skeletal bodies of those who died from the initial outbreak.

Their laws and rules are also mostly guided by superstition and fables.

There are other neighboring "tribes", that function under their own set of laws and rules, with whom Ice Cream and her group interact - the Christings, who are godly church-going people; The Lowells, who live in an abandoned mill and act as laborers and merchants; and The Nat Mass Armies, a military-like group of males. And when Ice Cream and her crew unexpectedly stumble across a grown white man hiding out in a sleeper's house during a routine raid, everything they thought they knew about life and the disease that claims them all at such a young age is about to change.

This 'roo' convinces Ice Cream Star that his people have a cure for their posies, and as her brother begins to show signs of the disease, she becomes determined to get her hands on it. What follows is a story of hardship, heartbreak, betrayal, and redemption.

The Country of Ice Cream Star immediately brings to mind Lord of the Flies. In this brave new world of parentless children, and of children having children, new societal norms and agreements have replaced the ones we typically function under. For example, women (or, more correctly, girls) can and do fight in wars but mostly lack social status. The Nat Mass Armies toss their unwanted female-born children to the Christings, kidnap others to keep as sex slaves, and are allowed to "choose" one against their will to become the Queen of the newest Nat Mass Army king. Inter-group pairings were looked upon as necessary strategic moves. Girls, once they hit their teenage years, were strongly urged to reproduce, in order to keep their tribe's numbers up. The Christings men, though claiming to follow the word of God, kept multiple wives. And one particular 'Panish' group with strange Catholic obsessions hand-select a man and woman, usually against their will, to become their Maria and Jesus, while they assigned "apostles" to manage and maintain their city laws.

This book also has strong similarities to Clockwork Orange. In the Country of Ice Cream Star, they all speak in a mish-moshed version of English, where most words lose their first letters (tober, vember, cember for the months of the year; lastic, lectric, larm, magine all have their opening vowels dropped) and others are just plain ole made-up.

Try this on for size:

"Ya, this been feary day, because we find a sleeper house. In houses with these dead we take no loot. It be unlucky wealth. Nor is good taboo to leave the house. Must rid it with clean fire."

Words like "vally", "bone", "bell", and "gratty" are defined only by their intended use within a sentence. And most of the time, you need to see it appear three or four times before you truly grasp its meaning. So, how does one keep track of all of this incredibly ambitious and strangely beautiful dialect? Well, like this... 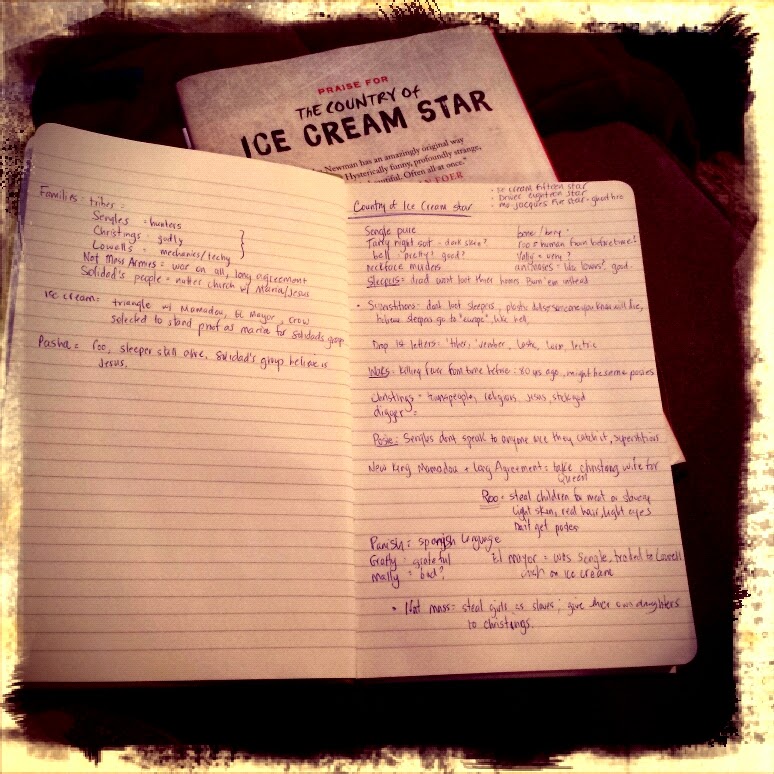 Honestly, I don't know how I would have made it past the first 50 pages without these notes. Being locked inside a single character's head for ~600 pages is one thing. Being locked inside Ice Cream Star's head, with this trimmed down but highly complicated dialect, was an entirely different animal!

Difficulties with decoding the dialect aside, by the time I read the first paragraph I knew I was in this for the long haul, For all of her flaws and naivety, I found Ice Cream to be incredibly charismatic. I was entirely too curious to follow her around to even consider putting the book down. You wanted to be there as she comforted her dying brother, as she rallied her tribe to stand alongside the roo to fight for the cure, and as she fought, struggled, and escaped whatever perils came their way.

Sandra Newman has crafted a fascinating and frightful alternate future, one that pulls you straight down into its very heart, though it's the unique language of Ice Cream Star that holds you there tightly. It's heady and ballsy and manages to break every dystopian barrier there is with a sophisticated ease.