It's the fourth and final installment of our four-part author interview series! We partnered with Cobalt Press, a brand spanking new small press publisher, to help spread the word about their kickstarter event for FOUR FATHERS, a collection of fatherly essays and stories by contributing authors Tom Williams, Ben Tanzer, BL Pawelek, and Dave Housley. (The kickstarter event closes on Monday. Feel free to check it out and if you are so inclined, throw a few bucks at it. You know you want to. Would I steer you wrong?) 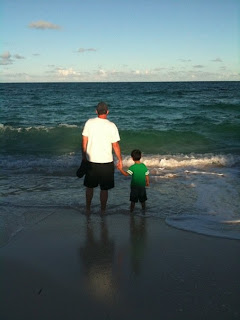 BL Pawelek: Have you ever been fired from a job? What did you do?

Dave Housely: I’ve only been fired from one job, and it was the first job I ever had, cutting the lawn for the man who is now my father in law. I was maybe twelve, and wanted money for, I don’t know, Van Halen records and popsicles. My father hooked me up with this job cutting the yard for my now father in law. I think I did that for a summer. My main memory is of this German shepherd who I remember as being about ten feet tall, who would stalk from window to window and bark furiously at me as I was doing the parts where the yard abutted the house. I was terrified of that dog, and apparently did a less than stellar job, because the next summer I was unceremoniously replaced by a kid from their neighborhood. I remember thinking, huh, that’s odd. It was the first time I had an inkling that maybe I had done a lousy job at something, and been kind of lazy, and it had cost me. I was so scared of that dog, though – a dog that my wife says was actually quite small for a shepherd (a fact that is in dispute, because I remember all ten feet of that dog snapping at my through the window) that it was fine with me. I was probably hoping to get a glimpse of the woman who is now my wife, but all I got was that terrifying, gigantic dog.

BP: If you had a million dollars to spend on one food and eat it, what would it be?

DH: This is a very odd question. I would probably buy one million dollars worth of El Pollo Rico Peruvian chicken from Washington, DC. We used to live about a mile from that place, and moved to Pennsylvania five years ago, and it’s still one of the things I miss most about DC. If I had one million dollars I would open up an El Pollo Rico in my house and eat it for the rest of my life.

BP: When were you no longer a boy, but a man?

DH: I have a distinct memory of waking up maybe a month after starting my first real job and having this sense of dread that I had to go to work and I didn’t have a choice and this was pretty much how it was going to be for the rest of my life. I guess that’s a really depressing way to look at that transition, but I do think of that as a kind of coming of age lightbulb moment. That first month was kind of a novelty and a relief – I had a real job, after all, which was something we all wanted at that time (fresh out of college, sleeping on a friend’s couch in Alexandria, Virginia). But that idea of permanence hadn’t yet been processed in my brain, I suppose, until that morning. All of the sudden, I realized there wasn’t a finish line here – no graduation, no summer vacation – just getting out of bed and driving around the beltway and sitting in this office and doing my work.

A lot of what I’m writing about, still, is people coming to grips with that idea that the years of potential – in FOUR FATHERS it’s expressed as the idea that “anything can happen” – are essentially over, that the things that can happen are limited now, decisions have been made and paths chosen. For a lot of people, I think having children cements that idea, and it can be a hard thing to come to grips with. See how I bring the book back into that question? Marketing!

BP: Why did you want to have a kid like me?

DH: Shit just got REAL, Pawelek! This is a really tough question to answer. Wow, can I quote a Todd Parr book? At the risk of being totally corny, there’s a book about adoption that he wrote and it answers that question pretty nicely (our son, Ben, is adopted). This is the parents talking to the kid about why they’ve adopted him/her: “Because you needed somebody to love you, and we had love to give.” That’s better than any five thousand words I could write on it, I think.

BP: How much money is enough money?

DH: Everybody only needs enough money to purchase a lifetime supply of Peruvian chicken, the estimated cost of which is roughly one million dollars.


Dave Housley is the author of the story collections "If I Knew the Way, I Would Take You Home," forthcoming from Dzanc, and "Ryan Seacrest is Famous." His work has appeared in The Collagist, Hobart, Mid-American Review, Nerve, Wigleaf, and some other places. He's one of the founding editors and fiction editors and all around do-stuff people at Barrelhouse magazine (barrelhousemag.com). He lives in State College, PA with his wife Lori and son Ben.
Posted by TNBBC Super Mod at 5:00 AM