Collin Kelley's Would You Rather

Collin Kelley's
Would You Rather 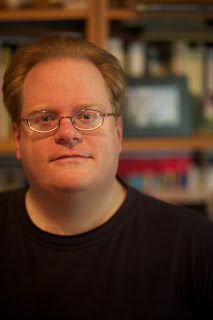 Would you rather write an entire book with your feet or with your tongue?
My feet. I save my oral skills for other things.

Would you rather be a well-known author now or be considered a literary genius after you’re dead?
Now, damn it! To quote Carrie Fisher, instant gratification takes too long.

Would you rather write a book without using conjunctions or have every sentence of your book begin with one?
Without conjunctions. I’m sort of doing this with some of the dialogue in my Venus Trilogy because some of the characters are French and don’t have full command of the English language. I want their voice to have that stilted quality.

Would you rather have every word of your favorite novel tattooed on your skin or always playing as an audio in the background for the rest of your life?
Tattooed. I think the audio would eventually become boring and monotonous, especially while doing my own writing.

Would you rather write a plot twist you hated or write a character you hated?
A character I hated. Isn’t that what a good villain is all about?

Would you rather use your skin as paper or your blood as ink?
Skin as paper. For reference, see the Peter Greenaway film “The Pillow Book” starring the incredibly naked Ewan McGregor.

Would you rather become a character in your novel or have your characters escape the page and reenact the novel in real life?
Real life. Especially if I get to have sex with a couple of my characters.

Would you rather have schools teach your book or ban your book?
Teach would be nice, but the publicity for having it banned would be fantastic.

Would you rather be forced to listen to Ayn Rand bloviate for an hour or be hit on by an angry Dylan Thomas?
Hit me again, Dylan, and put some stank on it!

Would you rather be reduced to speaking only in haiku or be capable of only writing in haiku?
I speak in haiku
Which I would rather not do
But coo coo ca choo

I will begrudgingly say 50 Shades, although I can read a little French, so maybe...
Would you rather critics rip your book apart publically or never talk about it at all?
Rip me to shreds. As Mr. Wilde said, the only thing worse than being talked about is not being talked about.

Would you rather have everything you think automatically appear on your Twitter feed or have a voice in your head narrate your every move?
I already have voices in my head, so one more won’t hurt.

Would you rather give up your computer or pens and paper?
Pen and paper. Honestly, my handwriting is so bad that I wouldn’t miss it.

Would you rather write an entire novel standing on your tippy-toes or laying down flat on your back?
I’ve been told I do some of my best work on my back.

Would you rather read naked in front of a packed room or have no one show up to your reading?
I think there would be an empty room in either scenario.

Would you rather read a book that is written poorly but has an excellent story, or read one with weak content but is written well?
Excellent story. I’ve written plenty of mainstream and self-published books that aren’t very well written but have a helluva story to tell.

And here's Collin's response to the Kathe Koja's question from last week:


From the Fringe science lab: Would you trade places with your bestselling author alternate universe self if it meant never seeing your own world again (not to mention trapping your doppelganger in a place where they don’t belong)?

Collin Kelley is the author of the novels Conquering Venus (2009, Vanilla Heart Publishing) and Remain In Light (2011, Vanilla Heart Publishing), which was the runner-up for the 2013 Georgia Author of the Year Award in Fiction and a 2012 finalist for the Townsend Prize for Fiction. His poetry collections include Better To Travel (2003, iUniverse), Slow To Burn (2006, MetroMania Press), After the Poison (2008, Finishing Line Press) and Render (2013, Sibling Rivalry Press). Kelley is also the author of the short story collection, Kiss Shot (2012, Amazon Kindle Exclusive). A recipient of the Georgia Author of the Year Award, Deep South Festival of Writers Award and Goodreads Poetry Award, Kelley’s poetry, essays and interviews have appeared in magazines, journals and anthologies around the world. He lives in Atlanta, GA. For more information, visit www.collinkelley.com.
Posted by TNBBC Super Mod at 5:00 AM