Audioreview: How They Were Found 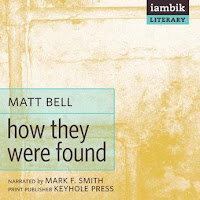 Matt Bell's How They Were Found was one of those books that sat on my to-buy list near forever but never really jumped out at me from the shelves as I was roaming the aisles of bookstores looking for something to buy.

Yet when I recently saw that Iambik had recorded it, I knew this was my chance to finally give it a whirl and procrastinate no more. Thank god for Iambik, man. If they hadn't published this, how much longer might I have gone without reading it? I shudder to think....

The stories contained within this collection deserve more than the typical reviewer-type, cliche buzz terms that run the risk of cheapening them -  like "powerful" and "deeply affecting" and "compelling" - but strike me dumb if his stories aren't exactly those things. Stripped down to only the most essential words, Bell cuts to the heart of each story and paints moody, dark, twisted reflections of would-be realities.

The narrator, Mark F Smith, did a fantastic job with this collection. As the first track got underway, I couldn't help but compare his voice to that of a much more soft spoken version of Alan Heathcock (author of Volt, of whom I had the pleasure of hearing perform a reading, and who has this incredible southern preacher voice thing going for him), mixed with a little of our local radio DJ Jumpin' Jeff Walker (minus the distracting lisp thing). While this might not seem like a compliment, it actually is. His pacing and tone matched Bell's stories to near perfection. His voice became a vehicle for each story...

As with any collection, some of Bell's pieces grabbed me more strongly than others. The Cartographer's Girl, a story about a sleepwalker who disappears and the man who loves her who painfully maps out every moment and every place and every memory he can recall in order to try to find her, was one of them. Dredge, which revolves around an emotionally unstable man who starts his own investigation into the murder of the drowned girl he pulled from the lake and stored inside a freezer box, is another.

How about The Leftover, which tells the story of a woman who discovers that she actually misses and loves the things that she made her ex give up while they were still together (like smoking and leaving clothes all over the house) when those bad habits appear on the couch one day, in the form of a silent mini-version of him?

My absolute favorite story, though, is The Receiving Tower, which details the slow, mental breakdown of the men who have been searching through the static of the government's receiving tower stations for years under the orders of their heartless captain, listening for the decoded messages being sent across the airwaves, cruelly unaware of the fact that the world has ended and there is no rescue for them. It reminded me of something The Twilight Zone might have put out, back in the day...

Of course, there were stories that failed to blow me away - like Wolf Parts, which is a dark and strange take on the whole Red Riding Hood thing, and Her Ennead, which takes us through a soon-to-be-mother's wacky imaginings of what her baby will become - though I am aware that these particular stories are held in high regard by some reviewers.

No matter which of his stories you prefer, Matt consistently teases the reader something terrible by burying threads of hope within the pages of his bleak and otherwise soul crushing tales of loss and love and broken hearts.  If his sparse storytelling doesn't hook you, the unique, awkward, inappropriately sentimental situations his characters find themselves in most certainly will.

I highly recommend listening to Iambik Audio's version of the book. (And, just in case that statement didn't floor you, that's actually saying a lot, coming from a previously reluctant audiobook listener, so you know, you should totally take me up on it!)