This is Lex Williford.


When asked where I write, I can only answer: It’s complicated.

The shortest, simplest answer it is that I write wherever I happen to be, and that’s usually all over the damn place.

For the last twenty-five years, I’ve written in many states where I’ve taught at different universities, including Arkansas, Alabama, Illinois, Missouri and Texas.  I’ve also written at a lot of artist residencies: the Blue Mountain Center, the Millay Colony and Yaddo (in upstate New York); the Centrum Foundation (in Washington state); the MacDowell Colony (in New Hampshire); the Djerassi Foundation and Villa Montalvo (in northern California); the Ragdale Foundation (north of Chicago); the Virginia Center for the Creative Arts (Long live VCCA and Sweet Briar College!); and the Wurlitzer Foundation (in Taos, New Mexico).  These places have changed my life and I miss them desperately, especially since I became a department chair, working summers full time for the last three years.  (I just have one more summer to go as chair, and then I plan to apply to residencies again.)

I spent most of my thirties and forties as a colony-roo, something the New Zealander husband of a former director of MacDowell Colony used to call me: I hopped from one artist colony to another during the summers for over a decade.  I realize now just how lucky I was then to be accepted to such gorgeous places of light, where I mostly wrote dark things.  I’ve not had an artist residency since 2005, since my wife Colleen and I started a family.  We have a son, Eamon, 6, and a daughter, Claire, 8.  I’ll turn 62 in November, and this is the first and only time I’ve been a father.  Best thing that ever happened to me.

I used to write a lot at home, wherever home was, usually in a study converted from a small bedroom, but since Eamon was born and our house is only three bedrooms, my study has become his bedroom.  Lot of good it did me to move out.  He never sleeps in this room but instead sleeps in our daughter’s room across the hall upstairs, on the floor instead of in the lower bunk under his sister’s. Usually, when both kids sleep upstairs, they wake up in the middle of the night and sneak into our bed, especially on windy nights and during dust storms and thunderstorms in the Chihuahuan Desert.  Last night, Eamon and Claire both slept between my wife and me, Eamon at the head of the bed, Claire at the foot, both of their feet almost touching each other heel to heel.  It gets crowded in our bed even with just one kid—Eamon pushing my wife and me to the edge till we almost fall off our sides of the bed.  Even though it’s a king-size bed that takes up most of our bedroom, our son has managed to crowd us out most nights, laying his head on my wife as a pillow and his feet on me as a footrest, the three of us waking up some mornings in the shape of a human H.

When I write at home, usually mornings after our kids have gone to Kohlberg Elementary—my wife teaches fourth grade there—this is the room at home where I mostly write.


Somehow, I’ve carved out a cramped little corner to write in this bedroom, using a fold-down desk/drafting table I built under a rotating flat-screened TV doing double duty as a monitor.  I also use this desk to illustrate the children’s picture book I’m working on: 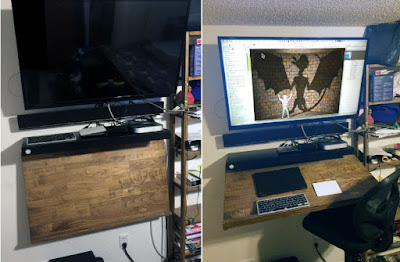 Afternoons, though, when I write and illustrate, I usually do it in my office at UTEP.

The University of Texas at El Paso recently awarded me a Faculty Enhancement Grant to illustrate my kids’ book, and I used the grant to buy a Thunderbolt monitor and a mean-fast little Mac Mini with a solid state drive and a lot of memory to handle Photoshop and other illustration apps.  I move the Mac Mini back and forth between my home and university offices just because I have no other choice.

My writing/illustration desk at UTEP, like the one at home, is another I built as a drafting table (this one thirty years old): 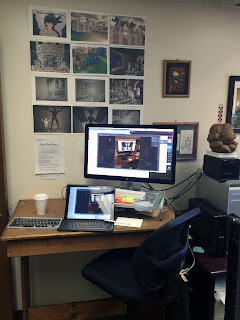 (The studies taped over the desk are the ones I’ve been working on the few years.  I’m glacier-slow as a writer and illustrator, though with global climate change I’m afraid I might win the race.)
When I’m writing long projects and have to spread out text or illustration documents over three monitors, I use my old 2008 Mac Pro—much bigger and much slower than my new Mac Mini: 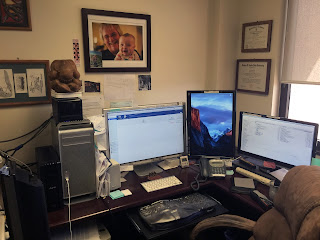 Because I’ve got a lousy back—I’m all legs and spine, 6’-5” tall—I sometimes write standing up, using the MacBook Pro I got as a professor at the university years ago, set up at just the right height on my file cabinets (like the one I’ve got set up at home on my dresser top): 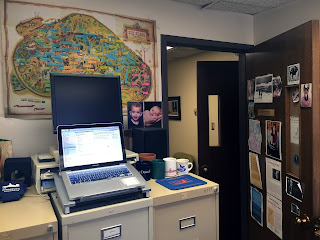 (Behind the computer is a facsimile of a 1965 map of Six Flags Over Texas, which I cobbled together from screenshots sent to me by the only person in Texas I’ve been able to find who owns an original map of the old park, the first Six Flags in the country just after it opened—part of research for a story I’ve been working on.)

For many years, I’ve been collecting strange items for my cluttered little writer’s altar— 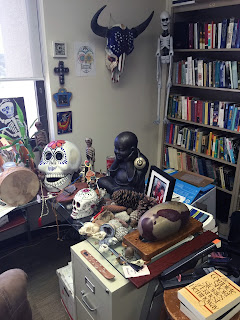 —which includes a surprisingly small cone from a 3000-year-old giant Sequoia; a Trilobite and the tooth of Spinosaurus; a small stone of melted sand, mildly radioactive green glass called Trinitite; the beak of a giant octopus I found washed up on a beach during low tide along Puget Sound; skulls of animals of all kinds, including a bison skull I’ve decorated with a bloody American flag, a cave painting from Lascaux and an old Harper’s sketch of the American buffalo genocide, stupid white men shooting at herds from the windows of trains for sport, leaving the piles of rotting carcasses all across the plains; a huge Buddha and mottled sacred stone like a dinosaur’s egg from the Ganges River called a shiva lingam; and a large assortment of treasures celebrating my favorite Mexican holiday: La Dia de los Muertos, the Day of the Dead.

Anyone who suspects I’m a weirdo and a computer geek who lives a cluttered life will find plenty of evidence on this office altar, which includes otherwise worthless things like rocks, leaves, piñon cones and acorns from my kids, plus rocks and driftwood other writers have picked up as souvenirs for me when we’ve hiked trails across the U. S.  I’m not superstitious—as skeptical as they come—but you ask me, it’s all mojo, magic stuff.  It helps, I swear.

I’m incredibly lucky to have my current office—which I’m sure to lose when I’m no longer chair— with a nice view of the Franklin Mountains from the ninth floor of the Education Building, the highest point on the UTEP campus: 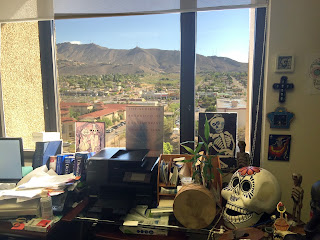 After seeing all this crazy stuff in my office, most people laugh and say, “How do get any writing done?”

The answer is simple: When I’m not nailed down, I carry my office around with me everywhere I go: 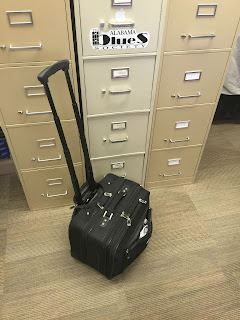 In this sixty-pound ripping-at-the-seams rolling travel bag—I have to buy one every year or so—I carry around my MacBook Pro and Mac-Mini, a Wacom Android hybrid drawing tablet, a 12” iPad Pro, three drawing styluses, dozens of miscellaneous adaptors, a keyboard and a trackpad.

It’s taken me many years to be able to afford buying all these writer’s and illustrator’s tools.  Despite more than my share of failures, I’ve been incredibly fortunate, mostly because I’m stubborn and more than a little obsessive.  Busy as I am, as a father, a professor, an editor and a department chair, I’ve never been more productive as a writer than I am right now.

(Oh, yeah, and when I can make the time, I also play the drums, a big Pearl set that takes up half son’s room, my old study, since he’s almost never there).

I don’t intend any of this to sound like bragging.  A quote over my desk from Dick Hugo says, “Be humble in real life and great on the page.”  I like that—and I like doing lots of different things; everything I do feeds everything else.  I’ve found it impossible to give up anything I love to do.
One of my favorite bumper stickers reads: “Those who have given up their dreams will discourage you in their own.”  So far, no amount of discouragement I’ve gotten along the way has stuck.

Not until I keel over, dead, I hope—knock on ancient redwood—I can only hope to keep my mojo working.
Posted by TNBBC Super Mod at 12:07 PM