This is J.R. Angelella. He is the author of the novel Zombie (Soho Press) as well as a forthcoming Southern Gothic supernatural YA series (Sourcebooks/Teen Fire) co-written with his wife, Kate Angelella. Their first book, Cursed, is set to publish in 2012. He is also a contributing author to the murder-mystery anthology Who Done It?(Soho Teen), benefiting the nonprofit organization 826NYC. He teaches creative writing at the Gotham Writers’ Workshop in New York City. His favorite band is the Drive-By Truckers and he doesn’t understand why they aren’t your favorite band too. He was born and raised in Baltimore, Maryland, and now lives in Brooklyn with his wife and their two flauntingly obese cats, Pacey and Bailey.

“What-ism: My Philosophy of Whatever Wherever & Whenever”

I thought that writing about where I write would be an easier assignment than it proved to be. A no-brainer. No big deal. As my mother likes to say, this assignment was going to be “a gimme.” What I realized, however, was that my writing habits are not, well, traditional, so to speak. I am not a writer who is a creature of any kind of habit. I don’t set daily word count goals for myself. I don’t write inside a rigid early-bird routine. I know that so many writers do set word count goals for themselves and write before the sun also rises, but I am just not built that way, or at least not right now.

I do subscribe to a strict writing routine when I am on deadline for an editor or under contract with a publisher. Presumably, most of my creative heavy-lifting has been done at this point, and all that’s left is for me to turn my madman notes into some semblance of discernible prose. For me, it’s getting to that semblance of discernible prose phase that is the issue. I probably spend more time sorting through and organizing my schizophrenic ideas than I should, but working inside a regular writing routine generally make this process slower and more arduous for me. I used to get up at 5am every morning, cranky-crawl to my desk and pushing-and-pull at words until I had to leave for work at 8am. 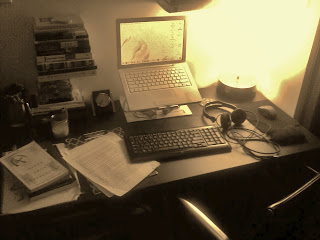 The problem was that I found myself spending an embarrassing amount of time deep-sea researching bizarre subjects online, and less time actually writing. To this day, I, quite innocently, clear out my internet browser history after every computer session, so that no one is subjected to whatever insane curiosity has recently piqued my interest. For example, this week I researched: the migration patterns of Mississippi Black Squirrels; the Zen-practice of provoking “great doubt” through the study of koans; how to harvest the Middle Eastern, DEA-classified, Schedule I narcotic catha edulis, better known as “Arabian tea” or “khat;” and how to tell the difference between a male (cob) and female (pen) Mute Swan. My point is this: clearly, my desk is not the best place for this writer to write.

For a while, I tried writing in bed. However, this, too, proved to be a failed experiment as my Maine Coon cat, Pacey, who I’m fairly convinced believes he will one day rule the world, became inappropriately fascinated with me and wholly committed to: knocking the pen out of my hand, sleep-smothering across all of my notebooks, waging a never-ending boxing battle with my computer chord, and not only ruthlessly stealing my headphones, but then refusing to give them back. 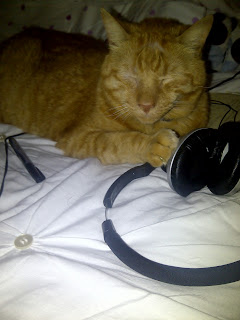 Finally, I embraced my fate as the Goldilocks of writing spaces and opened myself up to the opportunity of unknown environments. There is an Albert Camus quote from his essay on the absurd “The Myth of Sisyphus” that states: “If the world were clear, art would not exist.” With this, my new philosophy took shape and has been my main belief ever-since: “What-ism: My Philosophy of Whatever Wherever & Whenever.”

Allow me to explain. I write whatever wherever & whenever. For example: 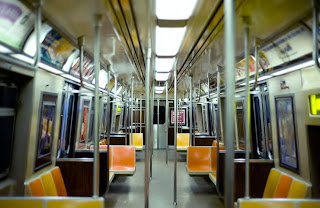 Hell, I even wrote several key scenes of my novel ZOMBIE while an EMT moonlighting as a “sleep tech” prepped me for a sleep study, and hot-glued 22 electrodes to my head, strapped elastic belts around my chest, and fit a pressure transducer up my nose. 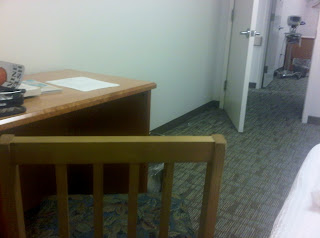 Today I write with a fluid and flexible mindset that allows for the absurdity of everyday life to influence my writing at any turn. Camus, the godfather of “What-ism,” also wrote: “At any street corner the feeling of absurdity can strike any man in the face.” Again—another personal truthbomb as the absurd has followed me to the following of late: doctors’ offices, dive bars, chain hotels, the Bolt Bus to Baltimore, corporate coffee shops, independent bookstores, multi-national bodegas, every taxi cab in New York and most restaurants.

[1] What-ism –  (pronunced: wət izəm) (noun) the belief that opacity is the mother of art, which is created whatever wherever & whenever possible; also the illegitimate philosophy of the absurd.

There—does that answer your question?

Check back next week to see where Isaac Marion gets his writing done.
Posted by TNBBC Super Mod at 5:00 AM