"To Be Read" Tuesdays

"To Be Read" Tuesdays is really just my way of sneaking a peek at your night-stand, coffee-table, book-shelf... where ever it is that you stack your piles of newly purchased unread books! And of course, returning the favor by allowing you a peek at mine...

I have been a good girl this past month, and havent bought many books at all, although I have been receiving ARC and Review copies in the mail. Here is a peek at my most recently acquired books:
(all book descriptions use some verbage taken from back cover blurbs, or goodreads)

ON DECK
Vampire Haiku - Ryan Mecum (How Books)
A poetic journal about Vampires - complete with photos, sketches, and stains. The owner of the journal was en route to a new land when he was turned into a Vampire, and we follow him on his journey through some of America's most defining moments.

2ND IN LINE
Please: Fiction inspired by The Smiths - Edited by Peter Wild (Harper)
A collection of stories that combine smart, emotion-filled literature with the melancholy, beauty, and wit of The Smith's music - Music that has made every outsider feel like a part of something.

3RD UP
Repetition Patterns - Ben Tanzer (CCLaP - eBook)
Experimental in the style of Radiohead, the Chicago Center for Literature and Photography released as it's first-ever original title. A fictional small town full of secrets and despair, with results that are partly Sherwood Anderson, Sam Shepard, with a fair dose of Chuck Klosterman thrown in for good measure.

4TH PLACE
Too young to Fall Asleep - Sally Weigel (CCLaP - eBook)
Originally written when she was still in high school, Asleep is one of the first-ever adult character dramas concerning the so-called "Millennials," a prescient and eerily mature look at the generation of youth just now entering college -- an entire nation of idealistic sincerity-seekers within a maelstrom of suicidal Gen-X parents, a nation of kids who have no problem getting wasted on weekends but feel horribly guilty when smoking cigarettes while doing so.

5TH
A Common Pornography - Kevin Sampsell (Harper)
Sharing family's unforgettable story — from his mother's first tumultuous marriages and his father's physical, pyschological, and sexual abuse of his half-sister to his own tales of first jobs, first bands, and first loves - Kevin intertwines the tragic with the everyday, the dysfunctional with the fun, lending the book its undeniable, unsensationalized reality. 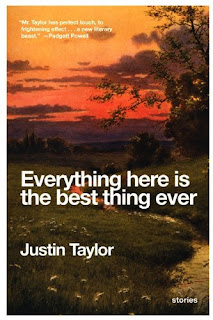 6TH AND FINAL PLACE
Everything here is the best thing ever - Justin Taylor (Harper)
Crystalline, spare, and oddly moving prose that cuts to the quick. A collection of short stories that are both tragic and funny, fearless and astute.

Post what's new on YOUR to be read pile and link me back to it by leaving a comment here.
Posted by TNBBC Super Mod at 7:40 AM