Tis the Season for Travels and Travails of Small Minds 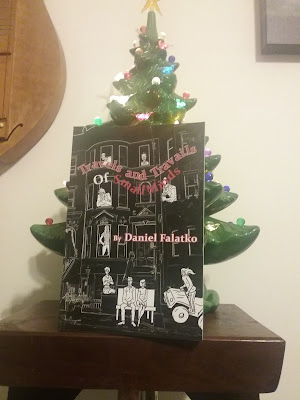 Daniel Falatko released Travels and Travails of Small Minds back in back in October with Ardent Writers Press.
You can grab yourself a copy here.


Trials and Travails of Small Minds follows the sideways trajectory of an unambitious career temp worker occupying the most nowhere of nowhere jobs. Nathan spends many a hungover morning and afternoon fetching coffee for his senile slumlord boss in a dust-choked office on the Lower East Side of Manhattan. Between gossiping with his lone co-worker in their dangerously untidy office, hanging with a drug-addled neighbor, and dealing with a jealousy-ridden girlfriend, Nathan stumbles headfirst into a clumsy property scam which finds him unknowingly at the center. With a cast of characters including a dead beatnik legend, an eccentric and pompous collector of the beatnik's works, a new love interest in the form of a tenant with unclear intentions, and a network of sociopathic former literature professors, a saga unfolds over eight days in August which sends Nathan careening through lower Manhattan, Brooklyn, the suburbs of England, and Beyond in a swirl of comedic intrigue.

"Travels and Travails of Small Minds is hilarious,entertaining, and weaves a compelling mystery." - Ben Arzate

"You won't read many books like this one, but you'll wish you could." - The Irresponsible Reader

"...a wild mind-trip. Falatko has an interesting take on the world and it’s worth exploring." - Shelf Stalker

"Falatko has a talent for rich, strange detail and keeps us engaged." - Alternating Current's The Coil

Daniel Falatko is the author of a previous novel, Condominium. He is a graduate of the MFA in Writing program at Vermont College of Fine Arts. He lives in New York City.
Posted by TNBBC Super Mod at 5:00 AM