Tis the Season for Gunmetal Blue 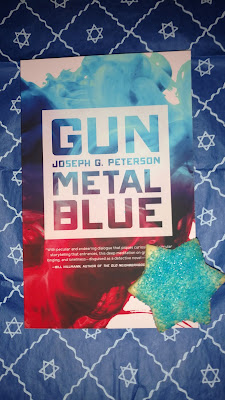 Gunmetal Blue releases tomorrow with Tortiose Books. It showcases Joseph G. Peterson at his inimitable best. It's delightfully absurd and horrifyingly plausible, a sad and funny look at what happens when our airy fantasies become gritty reality, and when that reality in turn falls apart into madness and nightmares.Consider picking it up this holiday season!


The guys in Gunmetal Blue are looking for some type of transcendence to lift them above the existential difficulties they find in just being alive on the planet. To that end, they like to shoot guns at the gun range; they like to go to the horse track; they fish and probably more than the should, they drink and grieve.

Pair Your Reading of Gunmetal Blue
with a MARTINI

1. A martini is a crystalline snowcapped mountain that you can ski with your eyes closed.

2. The winter air is scented with the smell of pine and your hair is blown back and your eyes are squinting against all the hurt you've ever known.

3. You proceed zigging and zagging down the slope to the sea-washed margins of the glass where the salt-brined olives await and dolphins swim in a sad pink light.


Joseph G. Peterson is the author of six novels and a short story collection. As a kid he ran through the fields with his brothers chasing rabbits; he fished ponds and rivers for carp; he played kick the can with the neighborhood kids. And then he matriculated to the University of Chicago where he received his BA in General Studies. He tended bar when you could smoke cigars in bars; he labored for the bricklayers who threw bricks at him for quoting poetry on the scaffolds. He still reads Wordsworth and Yeats. He lives in Chicago with his wife and two daughters.

His work has appeared in Banango Street, Akashic Books, Disembodied Text, Anthology of Chicago, Exquisite Corpse, New Millennium Writings, and other journals.
Posted by TNBBC Super Mod at 9:26 AM