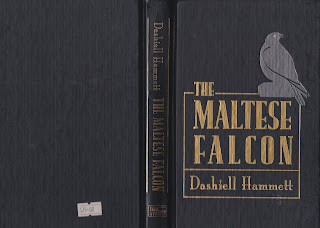 The written version narrowly pips Raymond Chandler’s The Big Sleep as my all-time favorite book. Although I’d say The Big Sleep has better one-liners, The Maltese Falcon has a grander plot and a superior ensemble of quirky characters.

Also, I love my black hardback edition – purchased for 155 Rupees in India by an old friend.
The price-sticker's still on the back, so I can remember.

In a nutshell, the story involves a treasured statuette that gets passed about in the early twentieth century, from Constantinople (prior to the events in the book) to San Francisco. People are knocked off, and P.I. Sam Spade is dragged into the fray.

That leads him directly into involvement with a Miss Wonderly, actually Brigid O’Shaughnessy, and a collection of oddballs like Joel Cairo, Floyd Thursby and Casper Gutman.

In the process, with each playing the other, it’s hard to say who the real victim might be, or if there actually is a winner.

Spade is described in the opening paragraph as looking “rather pleasantly like a blond satan”, and the text is peppered with dialogue quips such as this:

Joel Cairo: “You always have a very smooth explanation ready.”
Sam Spade: “What do you want me to do, learn to stutter?”

Our detective doesn’t care that his partner’s been killed in the second chapter – this gives him prime opportunity to redo the business name paint-job on window and door – but he is annoyed he now has to fend off Archer’s grieving widow.

And Spade does have principles:

“When a man’s partner is killed he’s supposed to do something about it. It doesn’t make any difference what you thought of him. He was your partner and you’re supposed to do something about it. Then it happens we were in the detective business. Well, when one of your organization gets killed it’s bad business to let the killer get away with it. It’s bad all around - bad for that one organization, bad for every detective everywhere.”

The Maltese Falcon – along with Hammett’s other work with the Continental Op – has been a major influence on my writing, one reason I called my protagonist ‘Floyd’ in Tobacco Stained Mountain Goat, and his favourite bar Kemidov’s.

If you’ve read it, I recommend a second look. If you haven’t – buy!

Andrez Bergen is an expat Australian writer, journalist, DJ, comic book artist and ad hoc saké connoisseur who’s been entrenched in Tokyo, Japan, for the past 15 years. His 1970s crime/noir novel BLACK SAILS, DISCO INFERNO just released in last month. Check it out here. Oh yeah, and he makes music as Little Nobody and ran groundbreaking Melbourne record label IF? over a decade.