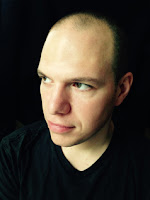 This is Anthony Michael Morena.

Anthony is a writer from New York who lives in Tel Aviv. In 2015 he received his MA in creative writing from Bar-Ilan University. His poetry and prose have appeared in The Normal School, Ninth Letter, Flapperhouse, and Queen Mob’s Tea House. He has also been a guest editor for The Ilanot Review and a regular reader for Gigantic Sequins, a good-looking, biannual, black & white literary arts journal. The Voyager Record: A Transmission (Rose Metal Press 2016) is his first book. Find him on Twitter @anphimimor and at anthonymichaelmorena.com. 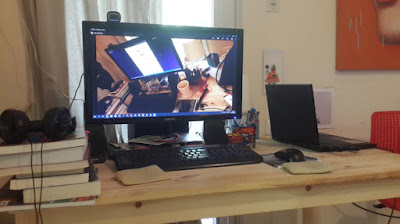 My entire desk philosophy is about function over form. Technically, my desk is not a desk at all, but an IKEA dining room table. It’s relatively new, and I still need to varnish it. We got it when my wife and I decided to share a work space. So far we like it. We both function well in the clutter. I keep a few fetishes at the base of the monitor to keep me focused. These are both inspirational and aspirational. I usually have a bunch of books piled up next to me, but the current double stack is excessive. The two pouches by the keyboard are wristpads that I lifehacked: they are just canvas change purses or pencil cases that I filled with plastic baggies of sand I collected on the beach. They work really well. 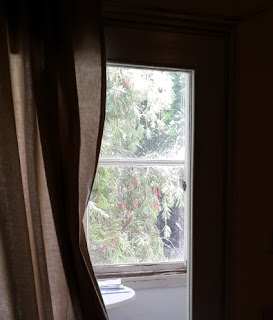 Obviously function is the reason why I have the table blocking off a door—that’s the door that leads to the back of the kitchen, which is accessible at the other end. We never used it, and it was easier to keep our kids away from the glass by blocking it off. I still get amazing light throughout the day when I pull back the drape, and there is a beautiful bottlebrush tree just outside the window there. In the rainier part of the year the bottlebrushes start to blossom and they attract all sorts of bugs and birds and, at night, bats. You can take the red blossoms and make tea out of them. I tried it once, but it was way too sylvan for me. In the winter, when the violent rainstorms come, the branches smash the hell out of those windows. One day they are going to break. 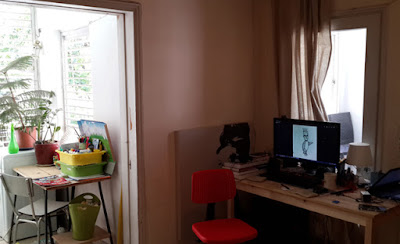 To my left is the entryway to a regular feature of many apartments here in Tel Aviv, the mirpeset (מרפסת). It’s basically a balcony that extends the length of the apartment. Outside is a park. I made that supplemental desk there with the kids’ art supplies on it by nailing together some loose bookshelves and setting them on top of a pair of metal IKEA table legs. Why not write out there, you’re probably asking. It’s too damp in the winter and unbearably hot in the summer for the kind of permanent desk set-up I like to use, but it is nice to go out there with pen and paper sometimes. 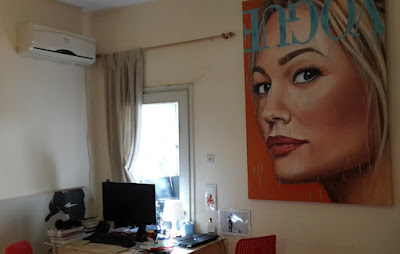 Over to the right of the desk is a large painting that was given as a gift to my wife by the artist, Jenie Moore. The Vogue title is upside down and dripping over the face of a model. 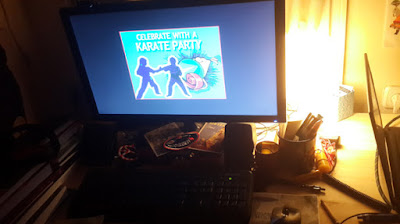 Most of the writing I do is at night though. The desk takes on a different character with the change in lighting.