This is Virginia Pye.

Virginia Pye has published award-winning short stories in literary magazines, including The North American Review, The Tampa Review, and The Baltimore Review. Her short e-book Her Mother’s Garden was published by SheBooks in January, 2014. Her essays can be found in The New York Times Opinionator blog, The Rumpus, Brain, Child. She holds an MFA from Sarah Lawrence and has taught writing at New York University and the University of Pennsylvania. Virginia currently divides her time between Richmond, VA and Cambridge, MA. Learn more at http://virginiapye.com/. 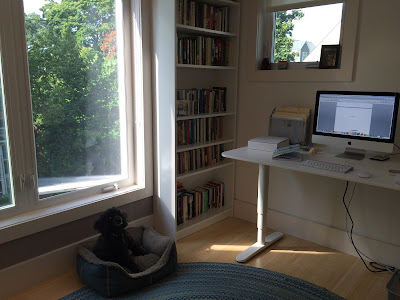 To write, I’ve always needed a window, preferably one that looks out onto trees or water, lawn or sky. In my home of seventeen years in Richmond, Virginia, we built a lovely study for me from a screened-in side porch. It had plenty of windows, but best of all was a back door that opened onto our yard and a little fishpond with a mini-waterfall. Because of the Richmond climate, I could keep that door open a good part of the year and the soft burbling of water helped elicit the creation of five novels.

But my husband and I have recently moved far north to Cambridge, Massachusetts. I have no illusions that my door can be kept open much of the year, but I still hope to rely on the view out my window to help my imagination thrive.

My new study is on the second floor and the windows are wide. I look across our narrow side street to my neighbor’s original clapboard farmhouse with its peeling, white front porch railing and several overgrown trees out front. It’s a charming view and quintessentially New England. In late summer, daylilies bloom and bow their heads over the sidewalk, and cicadas thrum at night, even in the city. It’s peaceful on this quiet cul de sac with few distractions, but I have to wonder if my creative mind will find a home here.

What is it about a place that helps us feel in tune with ourselves? We know when we feel at home. It’s hard to describe, but easy to recognize. Maybe some writers thrive on feeling out of place, or challenged by new surroundings, but for me, being settled into a place helps reduce distractions and opens the gates for creative thought.

While my new study isn’t as lovely as the one in Richmond, nor as connected to nature, it does have one different thing going for it: it’s in the town where I grew up. Only a few blocks away from our new home stands my former middle school. The pizza joint where I hung out as a young teenager still has the same name and apparently the slices are just as good. The streets I drive here are familiar, though I had forgotten the names of most. Only a mile away, the shops in Harvard Square have become glitzier and lacking in character, but that special hub still has the feeling of youthful excitement that I remember. The City of Cambridge has changed plenty in the past thirty-four years since I lived here, but I have the strange, inexplicable feeling that I belong.

The view out my study window frames treetops that before long will turn red and golden with autumn, then bare with winter. The sky will darken with snow. The sidewalks will grow slick with ice. For much of the year, the natural world will not be as inviting as it was in Richmond, but when I sit at my desk overlooking my neighbor’s old farmhouse across the way, I believe I’ll be able to conjure the imaginative space to write again. In my bones, I know I’m home.  Hopefully, my pen will know it, too.