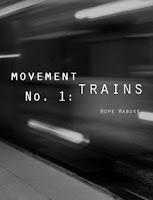 Movement No. 1: Trains is a single prose poem broken up into a chapbook. Some poems function better when left in their long form (they gain momentum and power as one piece) but Hope Wabuke’s poem gains strength from the pauses in between.

The speaker spends the course of the book reflecting on moments in her life, and relationships, while riding the subway. The lines are clear and very sensual, without being overly sexual; “it is only when she thinks of him that her body becomes soft; she is so conscious them.” There are so many moments where it is clear the speaker realizes this blur between memory and present, between the sensual and the mundane. The level of alertness and self analysis was very engaging.

Along with the quiet sensuality there are so many fantastic, grounding, details. The sixth poem in the collection reflects the unusual way time passes in a subway, saying “knowing the movement of time by the flow and ebb of crowds.” This is really one of those great moments where, as a writer, you wish you had written that.  The poet could have written about time and love in some abstract way, but instead these ideas are conveyed with the grounded actions.

Another feature of these prose poems is the way that the speaker reveals herself. The relationship that is at the core of the poem is clearly a rocky one, but she doesn’t come straight out and say it. Again, the poet wisely chooses to focus on the reality at hand: “at the end, as the crowds surge forward, it is easy to concentrate on the one moment of getting out.”

Often times I find myself wanting something in a collection, or wishing for a small tweak, but this book is so nicely self-contained and based in a tangible world that I’m satisfied. This is a nice, complete, read that is totally worth your time.