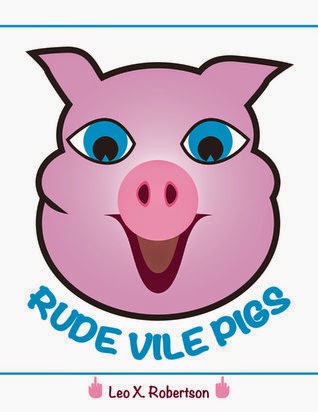 
When reading Rude Vile Pigs, there is no pressure to like its characters. They are rude, they are vile, and they are, essentially, quite piggish. Leo X Robertson could not have chosen a better title for this dark satirical look at humanity at its most down-and-out.

In the town of... wait for it... Sadwhitepeopledrinking, we find ourselves in the midst of a middle-aged alcoholic divorcee's mental breakdown. Jim Joy still has the key to his old place - the new owners haven't changed the lock yet - and when the family is out and about, he sneaks into the attic, smokes weed, and sets himself to eavesdropping on (and slightly, innocently, interfering with) them. He's emotionally paralyzed, can't come to terms with his new bachelorhood, and shamelessly hides from reality by invisibly integrating himself into, and falling in love with, the lives of Kate, George, and Kayleigh. Until the day he takes his obsession with them too far and finds himself arrested.

Coming to terms with the fact that he has officially hit rock bottom, Jim decides to stay there awhile and develops a kind of devil-may-care attitude. Shortly after Kate dropped the charges against him, Jim visits her at her place of employment, completely disregarding her insistence of never seeing him again. George finds out and kicks the shit of him. Jim's lack of reaction and jerky continued attempts to contact them begins to rub off. This selfish outlook of his - take whatever you want, do whatever you want, say whatever you want - unexpectedly spawns a new religion, one of embracing your inner asshole. People begin to witness Jim getting what he wants and boy does it look good. Before he knows what's happening, townsfolk are attending his weekly "sermons" to learn how best to develop their newly found fuck-all attitude. He's built an asshole-inner-circle. And being selfish has become infectious.

So what happens to a town where people stop giving a shit about the rules that once guided them? Where everyone is out for themselves and no one's got anyone's back anymore? And what happens when the man who started it all suddenly becomes sick and tired of it?

Rude Vile Pigs is told from the alternating perspectives of Jim, Kate, George, Kayleigh, and Jim's ex-wife Julia. However, before we get to the actual story, Leo spends the first seventeen pages showing us "how we got there" with a mish-mosh of internal dialogue, presenting the events out-of-sequence. If you are patient with yourself, and keep flipping back to the list of characters Leo provides you with, you'll quickly piece together what is taking place. And then, once the pivotal moment has been outed, you'll find yourself relaxing comfortably into the more familiar delivery of sequential chapters.

If you're anything like me, at times you might find Leo's humor to be somewhat forced. Is that common with satirical fiction? I've no shame in admitting that I don't always "get" the point of satire. Maybe that's why I also found Rude Vile Pigs guilty of attempting to take itself a wee bit too seriously? Perhaps I'm just jaded, but the idea of an entire town of people all of a sudden letting go of all social norms and doing whatever the fuck they want just because one dude is doing it and getting away with it is just a bit too out there for me.

It's like the kid who gets caught smoking and is forced to consume an entire pack, one cigarette immediately after the other. He was forced with the assumption that too much of a good thing will quickly becomes a bad thing. Something he'll get sick of before it starts to really take root. But who's to say that wouldn't backfire, and by giving the kid more of what he wants, you've just proved his point, that smoking is cool as shit and he'll be a steady pack-a-day'er for the rest of his life. He may even be able to convince a friend or two that this new lifestyle is perfect for them too, but a whole town of non-smokers? Now imagine that town of non-smokers being forced to smoke cigarette after cigarette, all at the same time... pack them into a room until the smoke has filled it from floor to ceiling, till all they can smell and taste is that cigarette smoke... how long until most of the people break away and run for the doors screaming and choking from the badness of it all?

It's the same idea, really. I'm going to be a jerk to you. I'll step all over you and get what I want. Does that make you idolize me and want to become a jerk so you can do the same thing to someone else? I doubt it. Assholes tend to demonstrate undesirable behaviors. The only one who thinks being an asshole is fun is the asshole. I don't necessarily agree that being an asshole creates more assholes. But why don't you read Rude Vile Pigs and contemplate that for yourself?
Posted by TNBBC Super Mod at 5:00 AM