Andrez Bergen is no stranger to TNBBC. When I saw that he had put together a kickstarter to turn his debut novel Tobacco-Stained Mountain Goat into a graphic novel, I thought it was a pretty cool idea, and knew I wanted to help him get the word out there to make the comic a reality: 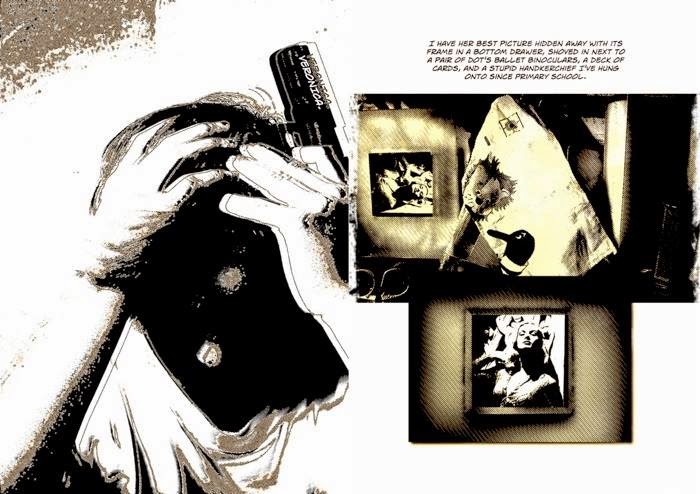 A TOBACCO-STAINED KICKSTARTER?
By Andrez Bergen

Not my favourite numbers in the world — I prefer six and seven — but apparently when you're assembling a graphic novel you need to think in terms of four, as in four pages at a time, when you're increasing or decreasing the size as this makes the easier for the printer. But I live in Japan, and here the number four is considered unlucky since it sounds the same as the word for death. Eight, on the other hand eight in China sounds similar to their word which means "prosper" or "wealth".

So maybe I'll go with eight.

What on earth am I waffling about? Well, I'm currently finishing off a graphic novel called Tobacco-Stained Mountain Goat, to be funded via a Kickstarter campaign that finishes on May 23rd.

While the initial funding was based around the concept of a bare-bones book 130 pages long and 50% colour, the Kickstarter campaign reaching that threshold thanks to some very cool and wonderful people — granting me the opportunity to move and breathe with the project.

It's now expanded to 144 pages at 75% colour, and I'm seriously contemplating extending the story to 148 or 152 depending on final progress with the Kickstarter over the next few days.

The thing is that extension is not stretching, since this graphic novel is based on my 2011 book Tobacco-Stained Mountain Goat, a hardboiled/noir detective story based in the dystopia that is near-future Melbourne. So I have plenty of room to move. I've only translated the first eighty-odd pages.

That novel got some great critical plaudits and has an average of 4.8 out of 5 stars on Amazon, so I must've done something right with the thing. I've also thought long and hard about narrative elements involving the fringe characters that were not in that original book.

This graphic novel has granted me the opportunity to return to that terrain, especially to develop the personalities of the women involved, Laurel and Veronica.

It's also given me the chance to go back to sequential artwork, something I've loved tinkering with since school days, and to here try to push the envelope.

While I wouldn't say I'm inventing brave new worlds of imagery, the art does veer into territory unto itself. Or so I like to believe. JR Love said it reminded him of Raymond Pettibone's artwork for the Sonic Youth album GOO. Probably I've been better brainwashed by my love of comic book artists Will Eisner, Barry Windsor-Smith, Jim Steranko, Steve Epting, Frank Miller, Jack Kirby, Steve Ditko and David Aja.

Meanwhile my Melbourne-based partner at IF? Commix, Matt Kyme, is the only one to have read the entire graphic novel as it currently stands — four or eight pages shorter than it might be. “I can recognize when I'm seeing something new and visionary,“ he emailed me back, “something that pushes the boundaries till they topple. I know when I'm staring at Van Gogh's ear.”

I'm slipping that in here 'cos I'm pretentious and loved the response.

Ears I can live with, even lopped off ones — in the name of art, and that jazz. But the four/eight conundrum is a beastie I won't be able to tackle till after the Kickstarter deadline in a few days' time.

Andrez Bergen is an expatriate Australian journalist, musician, DJ, writer, photographer and ad hoc beer & sake connoisseur who's been ensconced in Tokyo, Japan, for the past 13 years. Under the alias of Industrial Form he dabbled with graf and filmmaking in the early '90s, then set up indie electronic record label IF? in 1995 — since which time Bergen's made music under silly aliases like Little Nobody, Funk Gadget and Nana Mouskouri's Spectacles.He's also written for a fistful of magazines like Mixmag, VICE, Geek Monthy, Impact, Anime Insider, Filmink and Australian Style, as well as newspapers The Age (Australia) and the Yomiuri Shimbun (Japan).In April 2011 Bergen published his first novel, 'Tobacco-Stained Mountain Goat', through Another Sky Press. His second novel titled 'One Hundred Years of Vicissitude', was published in late 2012 via Perfect Edge Books. Bergen's third novel 'Who is Killing the Great Capes of Heropa?' (a noir/comicbook homage) and an anthology of his short stories and articles ('The Condimental Op') were published in 2013.Last year he also compiled a noir/dystopian anthology related to 'Tobacco-Stained Mountain Goat', titled 'The Tobacco-Stained Sky', and started making comic books with artist Matt Kyme. In July, 2014, look out for the graphic novel version of 'Tobacco-Stained Mountain Goat' (IF? Commix), along with new novel 'Depth Charging Ice Planet Goth' (Perfect Edge)
Posted by TNBBC Super Mod at 5:00 AM