Read 4/10/14 - 4/22/14
4 Stars - Strongly Recommended to readers who fancy stories about individuals who are just the right amount of fucked up
--- Pages
Publisher: Queen's Ferry Press
Released: 2014


The fine line between what is considered normal and what is actually fucked up is so fine that sometimes we walk back and forth across the damn thing and don't even realize. We live in a world where dysfunction has become a social norm. The distinction between what is acceptable and what is not, what is "normal" and what is not, is not so clear to us anymore. We become numb. We become expectant. We become acceptant. And in this way, we leave ourselves open to unfortunate and sometimes unavoidably unwelcome situations.

The stories in Elegantly Naked in My Sexy Mental Illness, Heather Fowler's fourth collection, hold a scalpel to the brain of each of its protagonists, in an attempt to differentiate true mental illness from what is natural and normal. When does a simple crush become an obsessive desire? At what point do we decide that these paranoid thoughts in our head are no longer innocent, no longer healthy?

In the opening story "Hand Licker", we meet a heartbroken mental case who sees his ex girlfriend's face everywhere he looks - in a burger and fries someone is eating, in other people's faces. His irresistible urge to lick their palms leads him to the redhead Claire, where he finds acceptance in a form he never knew before. In "Losing Married Women", our narrator unabashedly states "I am an unrepentant harvester of other people’s marriages", clearly not to blame for her insatiable appetite and eventual, habitual loss of interest.

There's a story about a women who becomes so fascinated with a co-worker's strange methods of hitting on her that even her own therapist tells her to shit or get off the pot; a relationship gone sour with a guy who's a confessed obsessive and the mental havoc it reeks on his paramour ; a doctor who can't keep his penis in his pants around one of his patients and why she allows it; a man who is abnormally attached to an old raggedy doll and his housekeeper; a good ole country girl with a club fist who gets a visit from a flirty little boy peddling bibles, only when he tries to take her on, she decides she won't go down without a fight.

And on and on.

The thing I love about Fowler and her characters is how they could be anybody. People you know, people you've accepted into your home, people who shoot the shit with you at work. Sure, they're a little weird, a little creepy at times, you all talk about them when their backs are turned, but they're nothing you haven't seen before, nothing to go to running to HR about. Her stories make you wonder, make you think, maybe even scare you a bit, give you those big ole goosebumps when you realize, shit, could have been me. How close am I standing to a situation like this right now? Could I ever be the object of someone's obsession and not even notice until it's too late?

After you read her stories, your guard will be up. Your eyes will turn their suspicious gaze left and right, left and right, all day long. You'll automatically diagnose everyone around you, and begin to keep your distance. But I promise it won't last long. Because the unease will wear off. The routine will suck you back in. The familiarity with these people, the trust, it will all return. And in a few week's time, it'll be as if you never looked at them any differently. And that's ok. Because it's the norm. And because sometimes, we find mental illness a little thrilling, a little sexy. 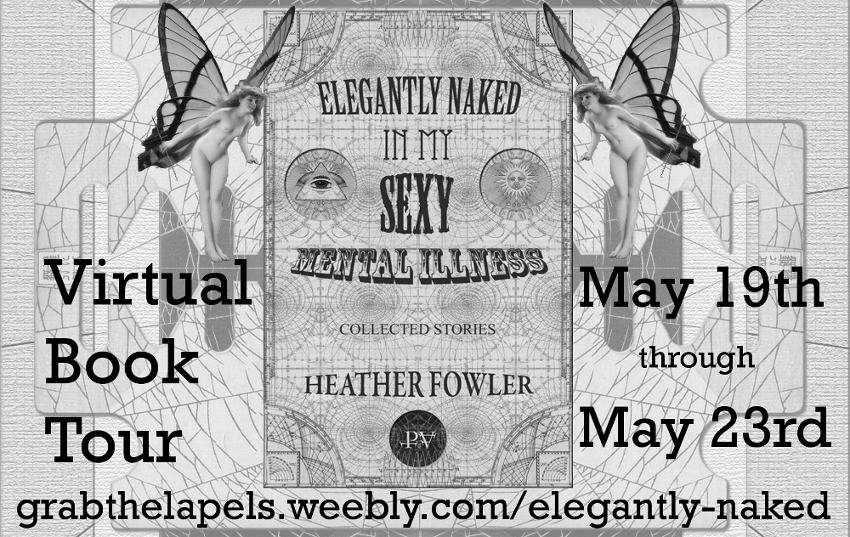 Heads up to those of you who'd like to learn a little bit more about Heather Fowler and this collection. Melanie, founder of Grab the Lapels (and TNBBC review contributor), has organized a blog tour and it'll be running around the internet all next week!

Here's the tour roster so you can follow along.