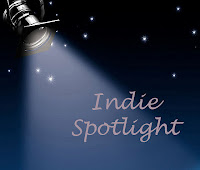 If you ever needed a reason to fall in love with small press literature (as if I haven't given you a million reasons to do so already, right?...), I've just found the perfect one for you.

Mellow Pages Library. This neat little Brooklyn library and reading room opened their doors back in February, and are doing some fucking amazing things with small press literature. Like, collecting limited runs and out-of-prints of the shit and hanging them all over the walls, inviting people up to read (as in both sit-down-on-the-couch-and-read, and authors-reading-out-loud-from-their books-read), and posting pictures of everyone who donates to their catalog.

Between you and me, I want to move into that room and throw my naked, small press obsessed body against the walls again and again again and never stop. Yes. I said it. What of it? I also want to be Matt and Jacob's bestie because they love small press literature as much as I do and have tons more of it than I do and they look like cool dudes and who DOESN'T want to be besties with two cool dudes who read and collect awesome literature and SHARE IT WITH THE WORLD, well, ok just Brooklyn for now, or those who can get to Brooklyn, but still, I'm sure THE WORLD is on their list of places to share their books with....

In the meantime, I wanted you to meet them, so you could fall in love with them too, and Matt and Jacob were incredibly obligingly wonderful and threw together this imaginary screenplay for you. Throw your feet up, balance a bowl of popcorn on your knees and prepare to fall in love.... 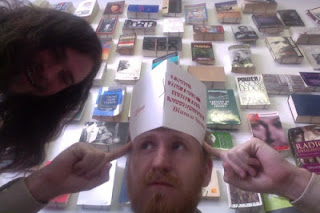 [THE CURTAINS RISE AND SEVERAL CAMERAS ARE POINTED TOWARD A SUBJECT/NARRATOR, SEATED STAGE CENTER. HEAVY LIGHTING. BLINDING LIGHTING. AUDIENCE IS UNAWARE SUBJECT IS ACTUALLY BEING FILMED. SUBJECT BEGINS TO DELIVER A MONOLOGUE:]

SUBJECT: “I heard about Mellow Pages Library when their first young spurts burst onto the indie book scene a few months ago. This was all online. My friend told me one of them had a knife collection. The Founders. The other one had a set of fine shaving razors. Yet they both had beards. Nothing seemed to add down. They were young and in control of their lives. They had everything. Or so it seemed...”

[THE SUBJECT IS IN FACT REVEALED TO BE JAMES LIPTON OF “IN THE ACTORS STUDIO”. AUDIENCE APPLAUDS. HE OPENS HIS EYES, THOUGH THINLY, THROUGH CIRCULAR SPECTACLES. MONOLOGUE CONTINUES]

JAMES LIPTON: “...Everyone wanted a piece of them, their ideas, yet they were giving them away quicker than one could politely ask. And why? This was the new question, the real question. Eventually I found myself experiencing that same eager pull. To ask. What was it these guys had to say for themselves? What were their principles, their morals? I wanted to know. What I didn’t realize, and now regret to disclose, is the discovery of an ‘Underground Indie Book Conspiracy’ Mellow Pages had been drug into and were fighting, at the expense of the wider scene, with hands perfect-bound behind their backs. [LIGHTS DIM HEAVILY, PROJECTOR SCREEN DESCENDS. NARRATION CONTINUES WHILE IMAGES BEGIN TO FILL THE SCREEN. A NORTHWEST SKYLINE APPEARS. TIMBERS AND SOARING EAGLES] This is a story of murk and corruption. Gloom and glitz. A story of boys struggling to stay afloat against the very conspiracy that sent them falling, Underground-Underground. To the Real Underground. [THE PHRASE: “OPERATION DUCK & DIVE” APPEARS ON THE SCREEN IN HELVETICA NEUE LIGHT ITALIC FONT, NO CAPS] This is their story, as they told it. And this is also my story. How I learned about “Operation Duck & Dive”...”

[IMAGERY BEHIND FONT FADES FROM TREES TO THE DUSTY STREETS OF BROOKLYN, THEN INTO A LARGE-ISH STUDY WITH A COMPUTER AND LIPTON HIMSELF TYPING AWAY. NARRATION CONTINUES]

JAMES LIPTON [ON SCREEN]: “When I got a chance to interview the elusive northwest beardboys about their mossy beginnings in the heartland of Cascadia my first inclination was to invite them over for a sustainable farm-to-table dinner. It had been a long time since they’d had a good meal and I needed them to talk, talk, talk. Food always arrows to talk.  I had planned a toasted trout tart with an alfalfa sprout bedding yet they refused. As it turned out, the boys only consume Loaded Baked Potato Flavored Kettle Chips and had already begun the five mile ride to my home on two stolen bikes, unbeknownst to me, torn-up flannels wrapped around their faces. One was missing a shoe. Before I could finish a response message I heard a ring at my door. I stood up and peered through the blinds. Could it be?”

[MATT NELSON AND JACOB PERKINS (THE FOUNDERS) BURST THROUGH JAMES LIPTON’S DOOR ON THE PROJECTOR SCREEN. JAMES LIPTON MAKES A SQUEALING SOUND. THE BOYS SIT LIPTON DOWN IN HIS LARGE-ISH STUDY AND BEGIN TO ASK HIM ANSWERS]

JACOB: “James Lipton. We’ve been waiting for your call. In times like these, trust everyone, including your best friends. We know. But we have something to tell you. We’ve been caught up in somewhat of a pickle here, Lipton. Listen, Lipton. THEY’RE OUT TO GET US.”

LIPTON [ON SCREEN]: “I’m afraid I have no idea what you’re talking about, boys. What’s the problem? I thought you could maybe explain some things for me. Small things. I’ve been reading all about you guys. I just wanted to ask you some questions. Really.”

MATT: “That’s what they all say, Lipton. Look, Lipton. Listen. We’ve got nothing left to tell. You said it yourself. You’ve been reading all about us. We know what you’re up to. YOU’RE ONE OF THEM.”

JACOB: “That’s right, Lipton. The old Duck & Dive, hah? Well, let me tell YOU something. We love indie book culture. In fact, we support it. By shelving indie books, buying indie books, hosting indie readers, promoting indie books online, arranging venues in which indie books can be sold. The list goes on. But you know it. It’s all there, Lipton, you just have to see around the lies.”

JACOB: “It’s a conspiracy, Lipton. I’m sure you know what that means.”

MATT: “Of course you do. Sure, you’d like to hear about our 200 square foot space located on Bogart Street right off the Morgan L stop, 56 Bogart to be exact. How you enter the front door and the third door on the left houses a thousand plus indie books loosely defined as a library but also a reading room wherein membership is free upon inclusion of ten books which, I might add, are always property of the member and redeemable at any time. You want to hear all about it.”

JACOB: “Hear all about it, hah? Well Lipton, hear about this: there are powers that be, Lipton, under the underground. And they want us. They want us back. They’re real far underground. Been fightin’em for weeks. We tell and we tell, and then they ask. It’s like Arabic, Lipton. All right-left.”

LIPTON: “This tells me absolutely nothing. What is this?”

MATT: “Nothing, Lipton? What about us makes us different than other libraries? Hah? Let me tell you. We try our damndest to get printed matter you can’t find anywhere else. Not at a bookstore, a Barnes&Noble. Not at a public library, not at a used bookstore. Yes we try and we try yet still we explain. We want to prove our necessity in our community. We want a collection of books you cannot find anywhere else. That’s our mission, Lipton. You can come in here on any given day and get coffee, light up a cigarette, drink as much beer as you want, Lipton. Hear that?”

JACOB: “You can submit to our Mellow Pages Paired Reviews for free beers. All you have to do is pair two books in the library and write a review involving both. You can buy books at local booksellers and get our stamp, our Mellow Pages stamp, and thereby come to our Free Beer If event and read from that book you bought at that store. And then we’ll give you a free beer. You can hold a reading, a release, a music show, a film screening, a dance, a fundraiser, anything in our space, and we’ll have you drinking a beer in no time.”

LIPTON: “But what is the conspiracy?” [PROJECTION FADES OUT, IMAGE AND SOUND]

[THE SCREEN RISES AND THE REAL LIPTON ONCE AGAIN COMES INTO VIEW. HE IS BLINDED WITH LIGHT. HE CONTINUES HIS ORIGINAL MONOLOGUE]

JAMES LIPTON: “As the evening went on the boys Matt and Jacob continued to explain their theory. What I gleaned from the exchange was somewhat vague. Although, to be sure, they had been followed. They had been followed to the house. We heard strange rustling in the bushes and when Matt and Jacob asked to leave, the strange bush figures seemed to run away with them, into the night. I had to rub my eyes at the sight of it. What I was witnessing? They had never removed their torn flannels and as such their expressions were mute. It was all a weird blur. I retreated to my study for some reflection, in the form of written word...” [THE CAMERAS AROUND LIPTON STOP ROLLING]

[AGAIN THE LIGHTS DIM HEAVILY, PROJECTOR SCREEN DESCENDS. NARRATION CONTINUES WHILE IMAGES BEGIN TO FILL THE SCREEN. A NORTHWEST SKYLINE APPEARS. TIMBERS AND SOARING EAGLES] ...“JAMES LIPTON: “...This is a story of murk and corruption. Gloom and glitz. A story of boys struggling to stay afloat against the very conspiracy that sent them falling, Underground-Underground. To the Real Underground. [THE PHRASE: “OPERATION DUCK & DIVE” APPEARS ON THE SCREEN IN HELVETICA NEUE LIGHT ITALIC FONT, NO CAPS] This is their story, as they told it. And this is also my story. How I learned about “Operation Duck & Dive”...””...