This is Nan Cuba. She received her MFA in fiction from the Warren Wilson Program for Writers, is the founder and executive director emeritus of Gemini Ink, a nonprofit literary center (www.geminiink.org), was twice the runner-up for the Dobie Paisano Fellowship, and received a Fundación Valparaiso Residency Grant in Mojácar, Spain. She is currently an associate professor of English at Our Lady of the Lake University. As an investigative journalist, she reported on the causes of extraordinary violence in publications such as LIFE and D Magazine. Her stories, poems, and reviews have appeared in Quarterly West, Columbia: A Magazine of Poetry & Prose, the Bloomsbury Review, and the Harvard Review, among others. She is coeditor of Art at Our Doorstep: San Antonio Writers & Artists (Trinity University Press, 2008), and her novel, Body and Bread, will be published by Engine Books in May 2013. 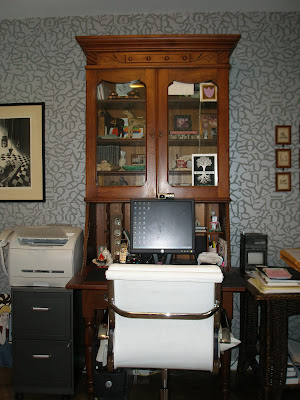 I’m sixty-five, and I’ve reverted to the womb.  When I converted a bedroom into my office, I consciously filled it with memorabilia and art, surrounding myself with artifacts that stimulate and nourish.  Everywhere I look: faces, scenes, chatter.  Stuck for a piece of dialogue: glance at the bookshelf to the left.  Need an image: look inside the glass-fronted cabinet above the desk.  If nothing else works, check the window on one wall.

I’m a phenomenon of self-discipline, a holdover from my Bible-belt upbringing.  When I sit at my desk, I have no trouble getting to work.  So once, I tried writing according to a specific schedule.  Fitting time around my day job, I rose at 4:00 a.m., read the previous day’s product, then pounded out a pledged three pages.  I loved being in the world when everyone else seemed out of it.  The dark, the quiet, the stillness invigorated, sending me straight to my subconscious.  Like an automaton, I stuck to my schedule because I’d been trained that failing to meet a commitment meant irresponsibility, flawed character, and worse, a father’s disappointment.  I was proud, productive, and finally, exhausted.  After five months, I went to bed with the flu, sleeping almost continually for a week. 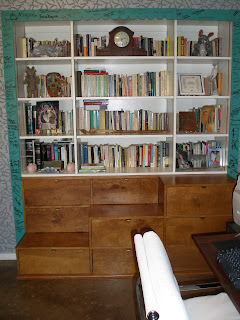 Now, like all my other tasks—planning classes, grading papers, running errands—I fit my writing into life’s evolving demands.  Although I miss that wee-hour nether-world, I can produce whenever I keep my appointment at the computer.  Like getting a haircut or attending faculty assembly, my writing opportunities vary but are slotted into my schedule.  I block out days on my calendar for upcoming projects and announce this to my family.  When I start writing, I find eating, talking, even dressing an irritation.  My husband brings meals on a tray.  I have arthritic hips, so I sit on a pillow, but eventually an ache forces me to rise and check the mail or take a trip to the bathroom.  If someone talks, I share what I’ve been working on, watching reactions.  Then I return to my computer.  Instead of clutching a rifle like Charlton Heston, my “cold, hard hands” will someday have to be pried from the keyboard.

I used to listen to the local classical radio station, but I’ve switched to one that plays jazz.  My parents were characters straight from Mad Men, a glass of Scotch in one hand, a cigarette or pipe in the other, songs by Nancy Wilson, Sarah Vaughn, or Benny Goodman filling our house, all of it topnotch background music I still hear.  I remember watching these artists and others—Duke Ellington, Miles Davis, Billie Holliday—on TV.  Once, I took my daughter to see Dizzy Gillespie at the Blue Note in NYC.  Now, it’s Coltrane, Simone, Monk, Parker, too many to name.  Like the narrator in ’s “Sonny’s Blues,” I enter every lick and pitch, listening to the haunting messages, warmed and bothered, opening while I type. 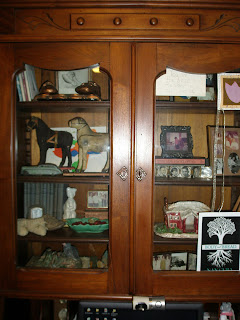 Like these musical idols, amazing writers also inspire me.  Each came to my house while I served as executive director of a literary center, Gemini Ink (www.geminiink.org), and I collected their autographs on a door frame that now borders my bookshelf.  Former teachers, role models, a few friends—literary icons, all—they cheer me on.  What else?  My grandmother’s sinister ceramic Easter rabbits, my father’s knit booties and toy horses, a Michael Nye photograph of two Indonesian women in saris, a pottery figure of the Mexica goddess Tlazolteotl, an iron mask of Sophocles, a former student’s pen-and-ink drawing, “The Poetess,” of what looks like a manikin on a gurney in a torture chamber. 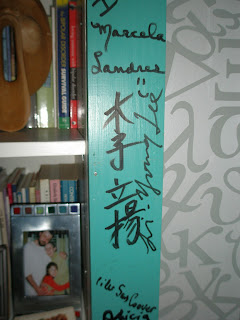 I sit at my grandmother’s drop-front secretary, an antique my mother used in a room she called the study.  My wallpaper is a jumble of letters from the Greek and English alphabets.  Even my paperclips have a special holder, one passed from my grandmother, to my mother, to me: a ceramic bug-eyed baby bird, its mouth stretched wide, its right foot glued at the ankle.  I’m cushioned and surrounded.  Ready to write.

Check back next week to see the writing space of Brian Griffith.
Posted by TNBBC Super Mod at 5:00 AM