Monday: And so it begins....
Event 1: After walking the city snapping photos to kill some time, Harper Perennial officially kick-started my BEA at 11:30am on Monday morning with their blogger lunch. Entering the reception area of the Harper building a few minutes early, I ended up standing around with Jenn of Jenn's Bookshelf, Candace of Beth Fish Reads, and Colleen of Books in the City, where introductions were quickly had. Nicole from Linus's Blanket (who I met at BKBF '10) and Rachel (my BBC'10 buddy) from A Home Between Pages were there as well!!
Erica, HP's Marketing Manager and writer of the blog The Olive Reader, ran the first half of the event - How a Book is Made. The book they introduced was The Bee Keepers Lament. Michael Signorelli, the book's editor, began by explaining his role which includes not only editing, but also pitching/launching the book to rest of the team. Robin Bilardello, from the art department, demonstrated just how many covers are created for a novel before the right one is chosen. Erica covered the role marketing plays, Jessica Wells covered the sales end, and Gregory Henry finished up with publicity.
Then we were introduced to the authors: Diana Spechler (Skinny), Lauren Belfer (A Fierce Radiance), Greg Olear (Fathermucker), and Talia Carner (Jerusalem Maiden). Of all the authors who were there, I was most excited to meet Greg in person. We had been communicating through twitter and goodreads ever since I reviewed his debut novel Totally Killer, nearly one year ago. 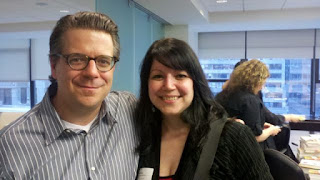 Of course he was initially seated far far away from me, so during the lunch we didn't have an opportunity to talk much. Instead, Rachel and I were locked into a conversation with Talia discussing how book bloggers review novels, the fairness of giving one-star reviews to a book you cannot finish, the unprofessional act of responding to bad reviews, and how she came to write the Jerusalem Maiden.
Once the food was cleared away, and books were passed around, Rachel and I managed to steal Greg's attention for a little while. It's surreal having a face to face conversation with someone you've gotten to know solely over the internet. And he was so sweet, he made me a mixed tape CD of some of his favorite new bands!! The conversation weaved back and forth between DC and NYC traffic, the books we are reading and digesting, and what our schedules looked like for the week. We promised to get together again throughout the course of BEA as time allowed.
I also spent a few minutes chatting with Diana. We discovered that her novel Skinny was supposed to be the center of a new series I had cooked up last year when I was an overwhelmed and completely disorganized blogger. Sadly, the series never saw the light of day, but we promised to find a new way to work together... keep your eyes out for this one!
Before I knew it, the lunch party was over and I hadn't even grabbed copies of the novels for the other authors to sign!
Event 2: Rachel and I took off for the second event of the day, Random House's Reader Circle Tea Party. I met the face behind the @atrandom tweets, which turned out to be Rachel's friend from college. The set up in the tea room was pretty cool, even though the room itself felt like the inside of an oven. Man, I was melting in there! They had cookies and fruity wine and hot tea. They also had backlist titles, recent releases, and tote bags stacked throughout the room for the taking.
My favorite memory of the Random House event took place before the author, Lisa See, took the podium to discuss her new novel. I was reunited with a long lost friend from 15 years ago. Follow the link to see how it all went down!
Event 3: After catching up and introducing her to Rachel (apparently they shared an "awkward" moment at the backlist table), my long lost buddy Tara and I parted ways for the evening, and Rachel and I continued on to the Picador Cocktail party.
We were a bit early so we swung into a tea shop near the Flat Iron Building, and I had the yummiest sun dried tomato and cheddar cheese pastry I have ever tasted. (It was like heaven somehow got wrapped inside those three delicious bites.)
Up to the 19th floor we went, where we saw some familiar blogger faces (Colleen, Nicole, Jenn, and Candace) and were introduced to the Picador Staff - Heather Kirkpatrick and Nicholas Richardson, and a gentleman whose name I forget but I believe was the head of sales for the imprint. Many memorable conversations were born at that party, but the one I remember best was when I found myself standing up for the self published authors who chose to be self published. Boasting that I was the voice for the underdog, Nick, Rachel, the sales-guy-whose-name-escapes-me, and I had a pretty vibrant discussion that took us well into the evening. It was loads of fun, and I felt I had won myself a new friend at Picador because of it.
Then the coolest thing happened! Picador opened their backroom to us! I admit to being completely overwhelmed back there, and struggled with the decision of which books to take. I was afraid to take too many and appear greedy, but I was also afraid that by not taking enough, the Picador crew might wonder why their novels weren't good enough for me. So I settled for three - two books by Sam Lipsyte (who I've seen read, but have never read) and a novel called Lowboy.
Finally, they had a raffle drawing where I won my first ever audio book "Among the Mad" and we were given adorable I Love Picador tote bags.
With Rachel's help, I was directed to the subway that would take me back to Port Authority and my car, and headed back towards the Pocono's with a contented sigh, and my ears filled with the new music of Greg Olear's CD.
If this post didn't bore your brains out, check back tomorrow to hear all about the Authors and Bloggers I was lucky enough to meet during my week at BEA.
Posted by TNBBC Super Mod at 8:00 AM