We're happy to help Meerkat Press support the release of their latest title The Invisible by participating in their blog tour.

And if you're at all into winning free stuff, they're running a giveaway where you can potentially win a $50 book shopping spree.
Click here to enter.

For today's stop, Seb Doubinsky's having a little bit of fun with our Would You Rather series, a fun, literary spin on the ole Would You Rather game. He was forced to pick bizarre books sides for 20 questions:

Seb Doubinsky's
Would You Rather 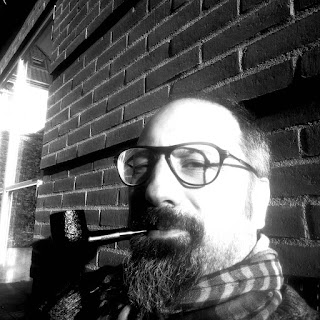 Would you rather write an entire book with your feet or with your tongue?
With my feet. I have big feet. I would write faster.

Would you rather be a well known author now or be considered a literary genius after you’re dead?
I presume all serious writers can only choose number 2, and I’m a pretty serious writer myself so 2.

Would you rather have every word of your favorite novel tattooed on your skin or always playing as an audio in the background for the rest of your life?
Tattoo me anytime, but please make it a short novel.

Would you rather write a book you truly believe in and have no one read it or write a crappy book that comprises everything you believe in and have it become an overnight success?
When I began writing, years ago, I thought that number one was the only way to go. And I still stand by it.

Would you rather write a plot twist you hated or write a character you hated?
A character I hated. Hell, I’ve done it many times!

Would you rather use your skin as paper or your blood as ink?
My skin as paper, if I am being written on with a feather.

Would you rather become a character in your novel or have your characters escape the page and reenact the novel in real life?
What do you mean? I am NOT a character in one of my novels?

Would you rather have schools teach your book or ban your book?
Teach my book, because it would make the students aware of the asymmetry of power in the institution.

Would you rather be forced to listen to Ayn Rand bloviate for an hour or be hit on by an angry Dylan Thomas?
Definitely hit by Dylan Thomas. An honor, even. Then we could share a drink.

Would you rather be reduced to speaking only in haiku or be capable of only writing in haiku?
I already write most of my poetry in pseudo-haiku form, so 2.

Would you rather be stuck on an island with only the 50 Shades Series or a series in a language you couldn’t read?
Definitely the 50 shades series. I could both read them and use them as toiler paper.

Would you rather critics rip your book apart publicly or never talk about it at all?
It would be nice if they ignored me if they didn’t like the book.

Would you rather have everything you think automatically appear on your Twitter feed or have a voice in your head narrate your every move?
My voice in my head tells me to write 2.

Would you rather give up your computer or pens and paper?
What about selling my computer? Would that work?

Would you rather write an entire novel standing on your tippy-toes or laying down flat on your back?
Laying down on my back. I could take naps once in a while too. Nice.

Would you rather read naked in front of a packed room or have no one show up to your reading?
Well, number one would be a welcome change.

Would you rather read a book that is written poorly but has an excellent story, or read one with weak content but is written well?
I always go for the story, unless the style is the story (Think Joyce, think Burroughs, think Ann Quin) 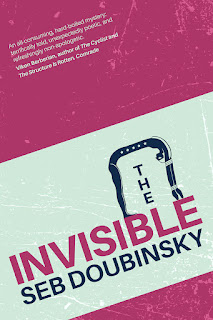 The Invisible is a masterfully written dystopian noir in Seb Doubinsky’s City-States Cycle books. It’s election time in New Babylon, and President Maggie Delgado is running for re-election but is threatened by the charismatic populist Ted Rust. Newly appointed City Commissioner Georg Ratner is given the priority task to fight the recent invasion of Synth in the streets of the capital, a powerful hallucinogen drug with a mysterious origin. When his old colleague asks him for help on another case and gets murdered, things become more and more complicated, and his official neutrality becomes a burden in the political intrigue he his gradually sucked into. Supported by Laura, his trustful life partner and the Egyptian goddess Nut, Ratner decides to fight for what he believes in, no matter the cost.