Welcome to our Indie Spotlight series. In which TNBBC gives small press authors the floor to shed some light on their writing process, publishing experiences, or whatever else they'd like to share with you, the readers!Today, we have a returning guest, Steven Mayfield, who will be celebrating the release of Treaure of the Blue Whale on April 1st.  Here's the jacket copy:


In this whimsical, often funny, Depression-era tale, young Connor O’Halloran decides to share a treasure he’s discovered on an isolated stretch of Northern California beach. Almost overnight, his sleepy seaside village is comically transformed into a bastion of consumerism, home to a commode with a jeweled seat cover, a pair of genuinely fake rare documents, a mail-order bride, and an organ-grinder’s monkey named Mr. Sprinkles. But when it turns out that the treasure is not real, Connor must conspire with Miss Lizzie Fryberg and a handful of town leaders he’s dubbed The Ambergrisians to save their friends and neighbors from financial ruin. Along the way, he discovers other treasures in the sometimes languid, sometimes exciting days of that long-ago season. He is rich and then he isn’t. He learns to sail a boat and about sex. He meets a real actor. He sneaks into villainous Cyrus Dinkle’s house and steals his letter opener. He almost goes to jail. He loves Fiona Littleleaf. He finds a father. And best of all, he and little brother, Alex, reclaim their mother from the darkness of mental illness.

And here's Steven, sharing some insight and lessons learned on landing an agent....

On Landing an Agent 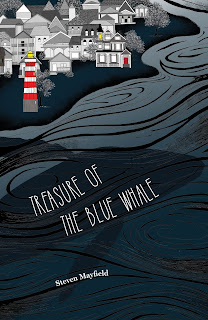 One of my favorite movies is The Ghost and Mrs. Muir. The lovely Gene Tierney plays a widow who rents a seaside cottage only to discover that it is haunted by its former owner, a crusty sea captain played by Rex Harrison. Predictably, Mrs. Muir and the captain put off one another at first, then fall in love. Toward the end of the movie, Mrs. Muir writes a book about their romance that she then peddles in person to a London publisher. Let me pause here for a moment. Yes…You heard me right. She went to the publisher in person without an appointment and he didn’t have a security guard escort her out of the building. In person—she went in person! Directly into the publisher's office! No appointment!

So…here’s what I think. In Mrs. Muir’s time, publishers didn’t work with agents. They simply sat around drinking tea until someone who looked as good as Gene Tierney showed up with a manuscript that they promptly published. I imagine there are skeptics among you, but watch the movie yourself if you don’t believe me. It’s very different now. It’s tough for an indie writer to land a literary agent because THEY ARE VERY, VERY BUSY. I’d repeat that for emphasis, but it’s already in caps. For those who don’t want an agent, there’s a tip: Either repeat things unnecessarily or use a lot of caps. Your choice.

Anyway, because agents are so terribly, terribly busy, they cannot reply to all emails. If they are interested in you, they’ll reply. It’s very much like seventh grade when I would  write a nice note to a girl I was interested in, including a poll at the end for her convenience:

I got a giggle if she liked me. If not, she made fun of my buck teeth and got her boyfriend to break my glasses.

Literary agents are the Holy Grail for indie writers. But here’s the thing: even the best agents can’t sell everything they represent. This is why they have to be so selective. Besides, they are VERY, VERY BUSY, remember? I simply can’t emphasize that enough. They need to first be queried with a short letter that reduces your work to as few words as possible; the less words the better. They’re like contestants on Name That Tune. For those younger than 900 years old, Name That Tune was a popular TV game show on which a contestant attempted to guess the title of a song in the least number of notes. Many of them were quite good, naming songs after hearing only three or four notes. Literary agents are like that. They can pick a best-seller after reading merely three or four words of a query email, indeed, to an experienced agent a postmark, alone, is often revealing enough to earn a rejection. This is why there are articles, webinars, conference sessions, even books that try to unravel the mystery of the perfect query. It can be overwhelming, so here’s some advice.

In your query, begin with a plot hook followed by a zippy description of a character or event. Next, write something about yourself that is humble and yet confident; factual, but not boastful. If you have published and received an award, do not mention it unless it was a really important award. Same for reviews. Unless they’re from important reviewers, nobody but your mother cares. It’s best not to be funny and never, ever waste the agent’s time. That’s a big one. Don’t waste their time, okay? Seriously. They are very, very busy. I think I’ve made that clear. Last of all, make sure to let the agent know why he or she was picked from among all the agents on the planet. Literary agents are people, too. They like to be courted.

It might seem that I don’t like literary agents, and that may have been true until I got one and realized how valuable they are. I certainly understand why mine is so busy. She’s dealing with me. That’s a tall order. Ask my wife. Still, I miss the old query days. I know that there’s an agent out who can reject my work after reading not four words, not three, but merely two or less. That person is my Moby Dick and a big part of me wants to go on querying the seven seas in search of her.

Steven Mayfield was born and raised in Nebraska, a place where people would prefer that you think well of them, should you think of them at all. He is a past recipient of the Mari Sandoz Prize for Fiction and the author of over fifty scientific and literary publications. After a hiatus away from creative writing that lasted almost twenty years—during which he published forty-two scientific articles, abstracts, chapters, and reviews—Steven resumed writing fiction in 1993. In 1994, his stories began to appear in print and have been published by Event, The Black River Review, cold-drill, artisan, The Long Story, and the anthology From Eulogy to Joy. In 1998, he was guest editor for the literary journal, Cabin Fever, and his collection of short stories, Howling at the Moon, was a Best Books of 2010 selection by USA Book News and an Eric Hoffer Award Finalist. His novel, Treasure of the Blue Whale will be released by Regal House Publishing in April, 2020.
Steven currently resides in Portland, Oregon with his wife, Pam, and three goldendoodles who can be annoyingly insistent around meal-time. He can order beer in four languages. His wife can say, “Pay no attention to this man” in five.