Philip grew up in the Bronx. He is the author of the novels: CATHOLIC BOYS; DARK ROAD, DEAD END; JESUSVILLE; THE BRONX KILL; and the story collection, A HISTORY OF THINGS LOST OR BROKEN, which won the Tartt First Fiction Prize, and the D.H. Lawrence Award. His stories have appeared widely in anthologies, literary journals and commercial magazines. He wrote and directed the independent feature film, LOVE IN THE AGE OF DION, which won a number of film festival awards, including Best Picture at the Long Island International Film Expo, and Best Director at the NY Film & Video Festival. He is professor of English at William Paterson University in New Jersey. Philip's new novel, IF ANYONE ASKS, SAY I DIED FROM THE HEARTBREAKING BLUES, is due out in February from Livingston Press/University of W. Alabama. Find him online at http://www.philipcioffari.com/. 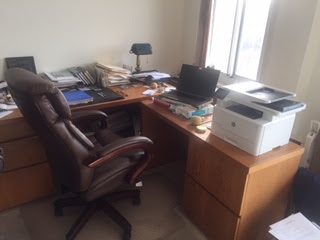 I write in a corner of my sixth floor apartment living room set up as a small office. When I write, I’m facing a window that overlooks trees and, beyond the trees, the buildings of my town, and beyond that a section of the George Washington Bridge and the skyline of New York City. 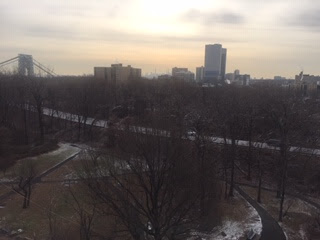 I would say that the view of the New York skyline is crucial to my well-being while I’m composing. It connects me to the place where I was born and raised. If I lean out the window, I can actually see the apartment housing complex in the Bronx where I spent my youth. Since I often write stories and novels set in the Bronx, this view stokes the fires of my memory, and helps unite who I am now to who I was. I like to keep that connection active and vibrant.