Kenny Mooney Recommends How It Is by Samuel Beckett 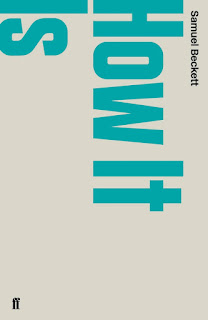 Beckett is probably much better known for his plays rather than his prose, which is a shame, because I would say the latter are much better. I discovered his novels fairly late after a friend suggested I read them. I’m rather annoyed I didn’t find them earlier, although I think I might have been just at the right moment in my life to really appreciate what he was doing.

I started with Malone Dies, as usual with me, always starting in the middle of a trilogy and then going back to the start. Although this particular “trilogy” (Molloy, Malone Dies, The Unnameable) is very loose. Malone Dies was a fascinating and beautifully stark piece of work that really resonated with me, as I was also very interested in writing that reduces, that explores minimalism. I read How It Is immediately after, and it was just staggeringly good.

It’s not really a novel, and arguably it isn’t really a poem either. It’s something in between. Written in a series of passages without any punctuation, each section is like a run on sentence with no real discernible beginning or end. At first it’s disorientating, as we are introduced to a character lying alone in the mud in the dark. Somewhere. But as you read on, a rhythm and a logic organically takes shape. And it’s one of the most beautiful literary works I’ve ever read.

It’s the style, the language in How It Is that just really grabs your attention. It’s a kind of perfect distillation of the ideas Beckett’s was exploring in his later prose, of reducing character, plot, narrative, stripping it all down to almost nothing at all. All you get in How It Is are the words straight from the mouth (mind) of the narrator, and it mirrors the claustrophobic atmosphere of darkness and loneliness, the desperation he feels when he finds another like him. And while it may be minimal, it’s no less vibrant for it. There’s a real pace and snap to the writing that makes it very readable, and much more accessible than his earlier exploration of this idea, The Unnameable.

Just opening the book anywhere and reading a few passages is such an inspirational thing to do, it’s that kind of a book. Something that you can drop in and out of; take some nourishment from the energy and lurch of the writing. For me as a writer, it’s also wonderful to be able to read something that dares to go where so many writers are told not to go. To read something that really does challenge conventions and has the bravery to dump a lot of things people expect from the novel. It’s genuinely one of those books that stands as something to aim for, at least for me. 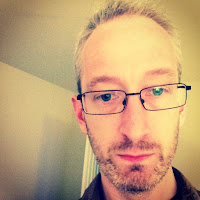 Kenny Mooney is a writer and musician, currently residing in York, England. He was born in Berlin and grew up in England, Scotland and Cyprus. His fiction has appeared in [PANK], New Dead Families, Literary Orphans, and others online and in print. His novella The Gift Garden will be published in early 2017. www.kennymooney.com.
Posted by TNBBC Super Mod at 5:00 AM