Page 69: Nativity of a Devil 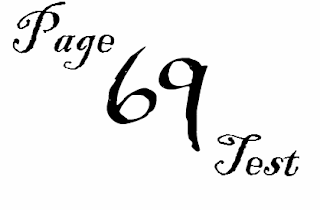 In this installment of Page 69,
we put C.V. Ruisdael's Nativity of a Devil to the test.

On Page 69 of Nativity of a Devil, a demon named Botis is luring the protagonist, Virgil, back in time to Constantinople to show him one of the seven deadly sins. In this scene, Botis is showing the boy the sin of gluttony, which is personified by the Glutton on this page. As history tells us, before the Empress Theodora actually became an empress, she had been a courtesan and burlesque dancer and, in this scene, the Glutton is trying his best to buy her for the night.

Botis and Virgil are watching the transaction from afar. (The currency that they mention, ‘silvata’ and ‘solidus’ are the equivalent of silver and gold.)

What is Nativity of a Devil about?

Nativity of a Devil is a semi-comical story about predestination and repentance: A boy named Virgil is constantly ridiculed at school because he has two strange nubs growing out of his forehead. The boys at school constantly call him a “Devil” and laugh at him. One day, Virgil lashes out on his classmates at school and gets suspended for seven days. And when his father learns about the boy’s suspension, he calls him a “Devil” as well in a bout of anger.

Since the whole world is calling him a “Devil,” Virgil actually starts to believe it and even thinks that he destined to be in Hell. Once the boy wishes to be in Hell, a demon named Botis emerges from the depths and carries him down into Hell. He tells the boy that he is indeed “predestined to become a demon,” and tries to show him how to be a demon by displaying all of the seven deadly sins in seven different historical periods. The demon shows the boy the Pride of Robespierre during the French Revolution, the Lust of an Archbishop during the time of the Black Plague and the Envy of a Roman statesman during the time of the Roman Empire.

After seeing all of the sins, however, Virgil wishes to return back to London and to beg forgiveness of his father. But the demon insists that the boy is predestined and must remain in Hell for all time to come.

Do you think this page gives our readers an accurate sense of what Nativity of a Devil is about? Does it align itself the book’s overall theme?

Although this particular page doesn’t align with the overall theme, it is a fine example of the adventure and humor that occurs in each of the seven chapters showing a deadly sin. All of the “sin chapters,” as I call them, are all different, however, are just little stories within a story—a frame narrative of sorts.

NATIVITY OF A DEVIL

Returning to Virgil, the demon rested his chin on the boy’s shoulder and said, “Let’s see what happens here…”

As the Glutton’s back-sweat glistened in the candlelight of the theatre, the demon looked on, pondering. “I wonder what she will she charge him? One thousand silvata? Three thousand? Four? She is, after all, the most coveted courtesan in all of Constantinople—so much so that even the Emperor Justinian will someday come and marry her.”

“Eight?!” the Glutton shouted, almost tripping over one of the chairs. Slowly, he regained his balance. “—Eight thousand solidus?” he murmured, as the flabbiness of his chin wriggled and shook.

“Eight thousand. And if you cannot afford that, sir,” Theodora answered, pointing at Botis, “then I shall ask the gentleman in the cowl what he is paying.”

Flustered, the Glutton turned around, looked at his servants and reluctantly nodded. “Eight thousand it is,” he told them. “Go and get it.”

Casting all of his regret aside, the Glutton looked back at Theodora adoringly and smiled. “Come, now. Let us eat,” he said. “Come,” he repeated, wrapping his thick, greasy fingers around her small, delicate wrist.

Theodora slapped his hand away proudly. “I do not


C.V. Ruisdael currently lives in Philadelphia, PA, but has lived in a number of cities in France, the Netherlands and Belgium. Nativity of a Devil is his first novella, but he has since prepared a number of short stories and, also, a full-length novel, which is set for publication at the end of 2015.