Last week I had the rare opportunity to read an unpublished manuscript by Steve Himmer, author of The Bee-Loud Glade. I was pining over some much anticipated supernatural novels - like Glen Duncan's Talulla Rising and Ben Percy's Red Moon - on Twitter and Steve mentioned that he had just the thing to hold me over.


His manuscript is called Scratch and though it is loosely based on Algonquian & Wampanoag lore from the region where the story is set, it's wholly original and incredibly unsettling.


Martin's the new guy in a small, secluded, superstitious town and he's heading up the new housing project out in the middle of the woods. As the trees are cut back to make space for the new development and after a frightening run-in with a bear, Martin learns about the legend of Scratch - an unknown entity that is accused of luring townspeople into the woods, never to be seen again. When a local drunk disappears, the rumors and whispers of Scratch rise up again. And what of the pile of bones that is uncovered while excavating the site? And the little boy who was last seen chasing a fox into the forest behind his home, was that Scratch's handy work as well?


The story leads you along, and you follow it willingly, much like that little boy followed the fox. And even though you are intent on catching up to it, you can feel the weight of the woods all around you, like a hundred eyes staring out from the darkness, hidden in the undergrowth and the clinging to the branches above... just out of sight. Steve starts to turn the tables in favor of our furry four legged friends...


I think Steve described it best when we were discussing the manuscript earlier today, "..Scratch dismisses the taken-for-granted familiar elements of literary fiction (the tragic childhood, etc.) and ultimately doesn't make human lives more important than any others. What's really compelling to me is the idea of a place built from layers: of stories, ecology, history, left behind objects, lives and deaths, folklore, etc., and how one layer is constantly erasing and overwriting another through invasive species, construction, industrial and agricultural migrations."


The manuscript currently sits in the hands of a publisher for consideration. And though it is certain to undergo many changes - some slight while others might be rather large - before it finally gets picked up, I want to share a little bit of the story so you can see why I was so taken with it. I want to give you something to restlessly anticipate. Maybe your interest in seeing more of the story could help it find its way into print faster? (no pressure.. right?)


World, I give you a sneak peek into Steve Himmer's unpublished manuscript Scratch!
(Shared with Steve's permission, of course!) 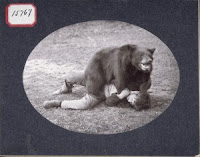 Then pain jerks him awake and he’s stretched on his back in the burnt-out foundation. He’s been dragged feet-first from his fireplace bed by a bear, a real bear, and now it rises to its full height and crashes down hard with its paws on his chest.

Martin lets out a sound that would be a yell if he could gather enough air to make one. His attempt to draw breath expands his chest just enough to increase the pressure and weight of the paws.

The bear leans across his body so its hot belly swings against his thighs. The pressure on his ribs is immense, and pushes the last gasps from his lungs. His hands spring to his defense without being asked, wrapping themselves as far as they can around the bear’s legs just above each of the paws, wrenches too small for the job. He pushes and pulls, struggling to move the thick legs, but they will not be budged. The pressure on his chest doesn’t increase but it doesn’t lighten up, either, and Martin wheezes and rasps, his struggle for breath made all the worse by his panic.

He feels the bear’s gaze on his face along with its hot breath, but he fights the urge to look. Some old memory, from a book he read as a child or some rerun he saw on TV, insists that the worst thing to do in a situation like this is to look a bear in the eyes. As if a situation like this happens often enough for there to be a wealth of advice.

He feels five sharp points of pain, and when he lowers his eyes without moving his head he sees that the claws of one paw have punctured the jacket, the T-shirt, his skin. The details of the holes are strangely acute, each frayed thread on his jacket individual and distinct and each curved claw glazed with its own unique pattern of cracks and chips. The other paw still presses his ribs.

Martin studies the claws for a long time, a moment so slow he starts to think he has already died and his spirit has drifted away from his body, that he’s watching all this from somewhere beyond himself. His head swims and he becomes dizzy despite lying flat on the ground. The treetops bordering his field of vision sway like the waves of a rough, green sea he is sinking under. 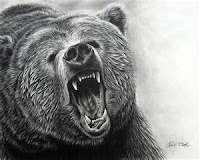 Then the bear grunts, and without increasing the weight on Martin’s chest it leans closer, filling his eyes with its body. Black fur streaked with copper surrounds him, and the bear smells of old meat and wet dog. Its cold black nose sniffs a circle around his head. He tries to lie still but can’t stop his body from shaking. The bear snorts beside his face and the air is so hot he feels it deep in his ear.

This is it, Martin thinks. This is the way I die.

No sooner does the thought cross his mind than the bear moves, draws its paws away from his body in a swift, sweeping motion that tears five bloody tracks through two layers of cloth and the skin underneath.

Now he does scream, loudly and at a high pitch. He sustains the harsh note until the bear rears up then slams a forefoot to the dirt beside each of his ears, shaking the scream from his throat. The back of his head bounces against the ground with the force of the impact.
The bear turns murky eyes onto Martin’s blue ones, and that hot breath makes him gag. He tries to stop his body from shaking, afraid it makes him look appetizing the way a lively fly lures a fish. He tries to look away from that wild gaze, the orange and yellow and brown of a fire, but the flame holds his eyes.

Then at last the bear’s body relaxes and the creature steps forward. It slides across Martin’s body so its hot, heavy fat slaps his face as it passes. The chaff and dust of dirty fur fill his nose, and he fights back a strong urge to sneeze. When the whole broad, black body has passed over his face, the bright light of morning rushes into his eyes and the sneeze bursts out before he can stop it.

The bear rises onto hind legs and climbs over the wall of the house. There’s a thud from outside the foundation, then Martin listens as his attacker lumbers away. He hears the thumps of the animal’s first few steps before the forest falls quiet again and there is only the pounding of his own pulse.

Then birdsong sneaks back in, leaves rustle, trunks creak and boughs crack, and the world carries on as if none of that happened. As if it was no more than a dream or a story.

If you liked what you read here, leave a comment to show your support of Steve and his manuscript.  And while we wait patiently to see if it gets signed to a publisher, why not follow Steve, visit his website, and pick up a copy of exceptional novel The Bee-Loud Glade, and ebook short The Second Most Dangerous Job in America?
Posted by TNBBC Super Mod at 5:00 AM