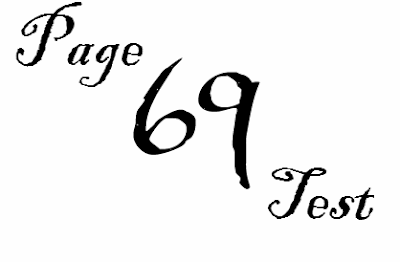 In this installment of Page 69,
we put Laura Ellen Scott's The Juliet to the test!

For months, retired cowboy actor Rigg Dexon has been holed up in The Mystery House, a legendary shack perched on the edge of a ghost town in Death Valley, and he’s surrounded himself with stacks of treasure maps from a 70s era cereal promotion for which he was the spokesman. When he comes of seclusion, he impulsively signs away the deed to a strange fan named Willie Judy, before going on a booze and drugs bender. Page 69 is where Rigg fumbles his way back to The Mystery House hoping for a place to crash, only to find that it’s being ransacked by a couple of amateur treasure hunters--retirees from Missouri who are looking for an emerald known as The Juliet.

What is The Juliet about?

The Juliet is about 100 years in the history of a cursed gem, and it’s about seven days in the spring of 2005 in Death Valley, when aimless Willie Judy finds focus after she receives the deed to The Mystery House, along with clues as to the whereabouts of The Juliet. It’s also about American dualities and self-reinvention, which is what going “out west” is all about. Almost every character in The Juliet is rationalizing the identity with which they were born and the legend they want to leave behind.

Do you think this page gives our readers an accurate sense of what The Juliet is about? Does it align itself the book’s overall theme?

It’s almost too on-the-nose: At the top of the page, Rigg Dexon is singing a 70s song about The Mystery House that owes its popularity to a tragic context.  Musically, the song is innocuous and bubbly like The Cowsill’s “Indian Lake,” but the singer/songwriter was supposedly killed by a desert cult, and when the song was released posthumously, it became an instant classic. So this passage--from Rigg’s pov--really underscores one of the strongest themes of the novel, that of legend-making:

The song named the house, and the stories of ghosts, murders, and treasure came after. A lot of history was like that, all twisted and made to fit. No one ever seemed satisfied with the way things really started or ended.

After this page, Rigg catches the treasure hunting couple rifling through the things he left behind and recognizes the woman as someone from his past—the singer/songwriter of “The Mystery House,” Kimber Logue, long assumed dead. That’s a common fantasy that pops up when a rocker dies young, but I don’t think the “faked death” has ever really happened, has it? I suppose we wouldn’t know, if it was done right. Anyway, Kimber’s storyline offers up the sister-theme to that of legend-making: the past, the true past, cannot be completely erased. 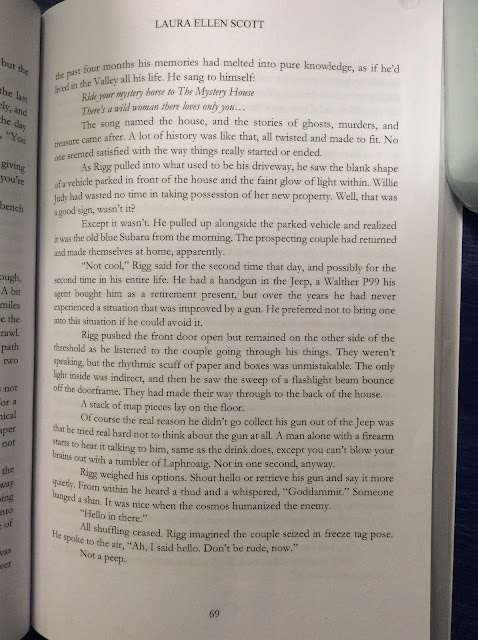 Laura Ellen Scott is the author of the novels Death Wishing (Ig Publishing, 2011) and The Juliet (Pandamoon Publishing, 2016). Her next novel, The Mean Bone in Her Body, will be published by Pandamoon Publishing at  the end of the year as the first book in her New Royal Mysteries series, set in a fictional college/prison town in Ohio. LES can be spammed at her website: http://lauraellenscott.com
Posted by TNBBC Super Mod at 5:00 AM