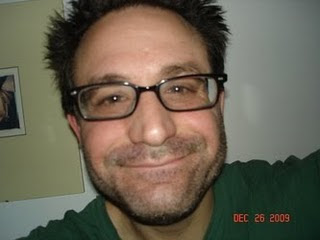 I'm very excited to bring you the following guest post by Ben Tanzer. Not because I was so very impressed with his eBook collection of short stories "Repetition Patterns" (although I really was). And not because he sent me two signed copies of "Most Likely You Go Your Way and I'll Go Mine" - one to review and one for a blog giveaway (although he totally did). And not because he was a great sport and agreed to let me interview him here (although he truly was). And not because he introduced me to GLBT author Collin Kelley (although he really did).
Ohhh, who am I kidding, it's for all of those reasons, and many more!! Ben is an out-and-out great guy. A hard working husband, father, author, and blogger who takes pride in everything he does. Even though his life must be as busy, crazy, and jam packed as Mr. Mom's, he always finds a way to make time for people like me - his fans!
After reading and reviewing his latest novel, which centered heavily around dating as a New Yorker in 1990, I threw this question out at Ben - "Why did you write this book? What was your own dating history?" - here was how he replied:

Dating: A Topic I Know Little About.... By Ben Tanzer

I have barely dated as an adult and whatever I was doing before getting where I am now, fourteen years and two little children into a marriage with someone I met as a teenager, probably had less to do with dating acumen, than meeting someone, or someone’s, sometimes sober, sometimes not, and getting as much action as possible, all the while trying to both hold on until things terribly imploded, and futilely avoid the inevitable tears and anguish, usually mine, though also those of whoever's mother I was refusing to let go off and borderline stalk, though back then we called it courting.

Wait, no we didn’t really call it courting, we just called it obsessive behavior, something I know a lot about.

Which is why I thought it would be fun to try and write a book about dating, because if we assume all new relationships are grounded in confusion, poor communication and working through whatever our compulsions are so we can hope to look normal and maybe even ultimately be loved, than I think I know enough about dating to write about it, especially when it allows me to riff on pop culture, New York City, sex, coping, friendship and the ripple effects of family dynamics across one’s lifetime, the things I obsess over any way.

And that is what Most Likely You Go Your Way and I’ll Go Mines grows out of, well that, and a woman I was once friends with who was getting married around the time I met her and when I asked her about how she and her husband met said "We dove right into it, we were in love, and that was it for me, and I thought for him, but of course, since he’s a guy, he backed out, got scared, crushed me, and then at some point we had to try and figure out if we could make it work despite all that."

I never forgot that conversation and when I finished my first novel Lucky Man, I thought what’s next, and I remembered that conversation, it had always been stuck in my brain and I started to wonder what it would look like for two people to fall fast and hard for each other, and then implode just as quickly, leaving them to decide at some point whether they want to try to piece whatever it was they once had back together again, and then if so, what that might look like?

It could probably look like a lot of things, but this is my version.
Posted by TNBBC Super Mod at 2:44 PM